Run 2044 DJ’s run according to Topless 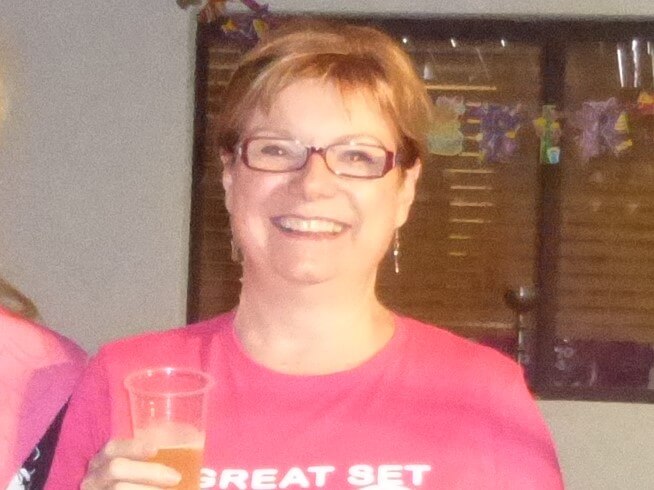 Lone Ranger was not around to do the run write up and I forgot to ask someone to do it.  I’m writing this run write up from memory…..but the champagne didn’t really help my Alzheimer…. don’t hold me responsible for any errors….hee….hee.

Camera, lights, action……the Perth Harriettes, Rocky City Harriettes and Hamersley guys were off …after the Hare called On On at the start. Rocky City Hash flash was taking alot of photos during our run making me feel guilty that I wasn’t taking any photos. We created quite a commotion with the loud laughing & talking noise and dressed in bright pink attracted alot of attention. Most of us were dressed in Pink for Kebab’s 50th birthday colour except for Kebab’s MUM…..Lol!  It was a great run because it was short and sweet!  Since it was Kebab’s birthday celebration there was an abundance of champagne flowing….I believe it was proudly sponsored by the birthday gal.

Since it was a joint run with the Rocky City Harriettes, they were not counted as Visitors.

Visitors: Hamersley hashers
Returnees: Buttless, Close to Me, Mustang and it was especially great to see Camel after a long absence.
Special run: Congrats to Jewells for 1100 runs.  Jam Tart baked a delicious Ginger cake for her 1100 run.

Bitchy Britches:  Any Name charged Ball Breaker for making a bitchy statement about DJ not being able to cook.  Ball Breaker transferred the charge to Guide Dog….for something I can’t remember ….oops it must be the Champagne kicking in.

Droopy boobs:  Tickets still kept it because there was no droopy boobs charges ….I think.

Charges:   XYZ from Hammersley was charged for not wearing a hash shirt, Rocky city gal was charged for standing higher than the GM …..then can’t remember other charges.

Any Name bought a delicious birthday cake for Kebab and a chocolate penis with Kebab’s sister giving her a jumping Penis out of the box.  You can see in the photos…..the Harriettes loved the Penis Pinata.   Men beware of DJ’s strong arms because she knocked the Pinata out of the hook!

So many charges and so many photos …..I ran out of battery for the camera… I had to borrow Coaster’s mobile.

It was a  fantastic party atmosphere and we ended quite late.  Roast beef sandwiches for dinner since we all know that DJ can’t cook or won’t cook.

On On to Lone Ranger’s place….now she has to do her own run write up!