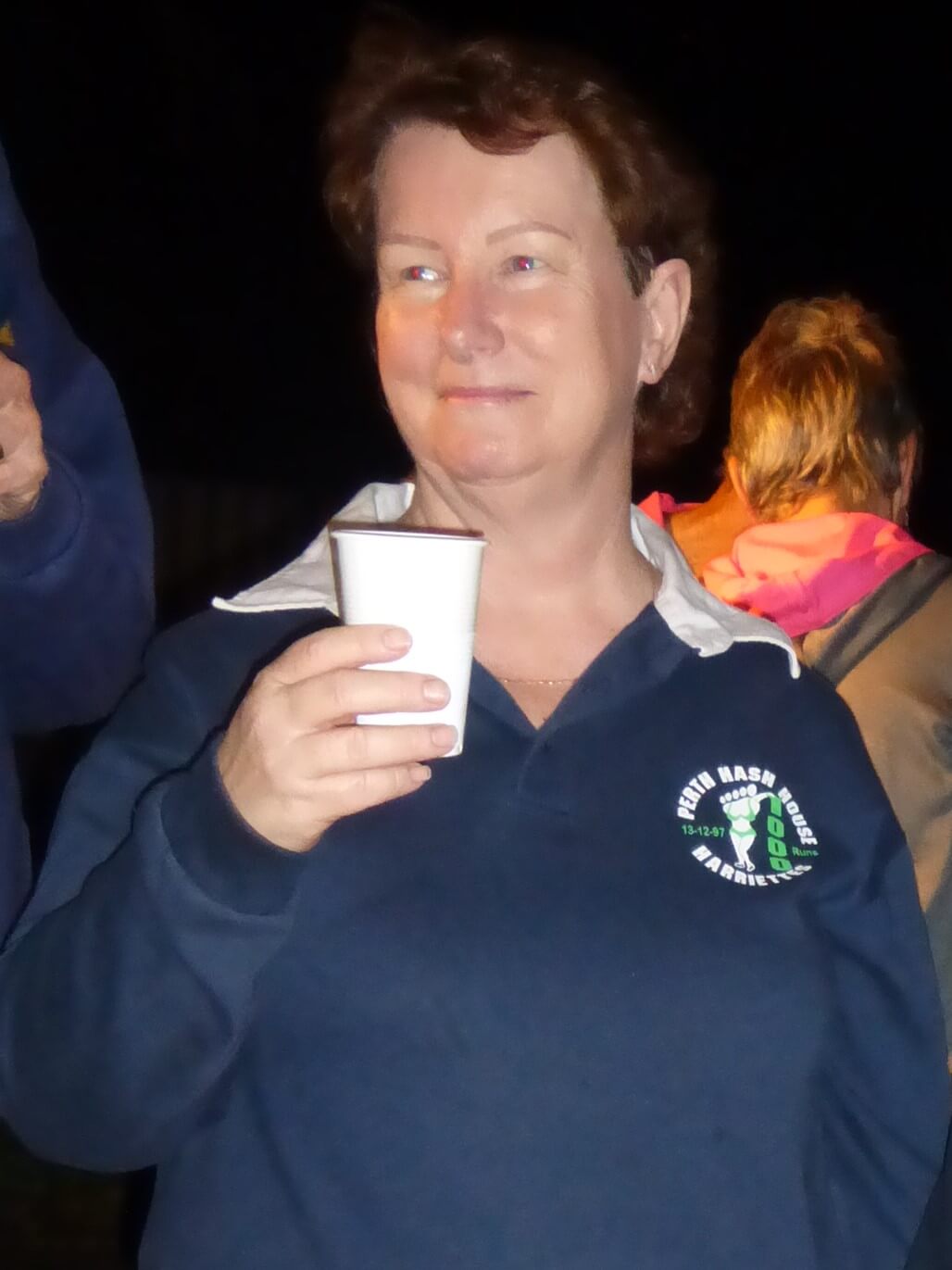 Heading off instructions were given with a warning that “Charlie” had been running around and rubbing out the arrows.  But lots were done so hopefully lots remained to show the way.
With a very pleasant cool summer eve the pack headed off.  Mary Poppins and I followed the pack, chatted lots, saw a lot of arrows, managed to not get lost or left behind and made it back home in reasonable time J

The pack all made it back with no problems, a quick drink and nibble and GM called circle.

Hare and Co-hare out for a DD.  Congratulated on a great run with lots of arrows.  Seems Charlie did not do a very good job his end.  Thrifty was blamed for all the “wonky” arrows which she said she managed to do without even having a drink.

No Visitors, but Commando came out for a returnee DD
No special runs either and although GM announced no Birthdays a halt was called as we had belated birthday cakes for Commando-  from Bumbo who with her usual styly had born again “00” candles, and Nightfill – from Coaster, choc chip cookies fresh made she swears.

Bitchy Britches handed over from Half Cut
Gorgeous nominated Anyname something about arriving on a broom stick
Half cut nominated Gorgeous for not opening the gate for her and then being told she was so thin that Gorgeous did not see her thru the gate ??
Head Banger nominated Anyname for something about a blowfish being a whale.  Which was a real bitchy comment.  So the winner was “Anyname” who it turns out had a sore foot so Gorgeous generously helped her into the britches.  Where are those angle wings.
Droopy Boobs: Guide Dog nominated Leopard for wearing pink on the wrong night, Half Cutnominated because she forgot she had the bitchy Britches, Tickets nominated Zippy for forgetting a name but some how this backfired and the Winner was Tickets, who catagoricly stated that the Droopy Boobs just did not compete her “the real deal”.

Charges
Committee and Shorty out for a drink for doing such a great job at the Salvo’s run
Tickets was asked to sing the song for them and claimed being traumatised with such short notice to come up with a song.
Tickets charged Sprinkler for racing ahead on the run with Dynamo for which Zippy piped up and said that Tickets was only remembering on how she used to run.
Sarge was charged for no Birthday hats.  Quick think and oh my gosh did they go with the Salvo stash pile last week.  To be checked out heh.
Show Off charged Cookie with trying to return to her a repaired Jumper which turned out to be Bumbo’s.  So Crafty No 2 was suggested.
Thrifty charged Tip’m for greeting, upon arrival, with a hello girls and Tickets.
Jewells charged Roll On for arriving with no hash gear.  But Roll on had a beautifully colour coordinated Ballarat Tee over her dress.

General Biz
GM announced there will be no secret Santa pressies this year but instead if you would like to donate $5 to Santa’s workshop please bring money next week.
Shorty is looking for a dog/house sitter
DJ parking instructions for next weeks run – Please park at the park.
Lone Ranger announced that $50 deposit for Rotto 9/10/11 Feb 2018 needed next week to secure possie please.
Lone Range also requested that if anyone had any larger tees that she could have as she would be needing them soon  wtf..CONGRATULATIONS Lone Ranger and Nanna to be Roll On.  Bubs due end of May 2018.

Tutti advised she dropped of 110 handbags to Bunnings who are collecting for Share your dignity
Tickets – Bounced double time ??? no idea what I meant by that note.  Ok, lost the plat a bit but saved with Cookie giving us another great joke and then Rice Bowl led us away in our song.
Great night Coaster
On On
DJ