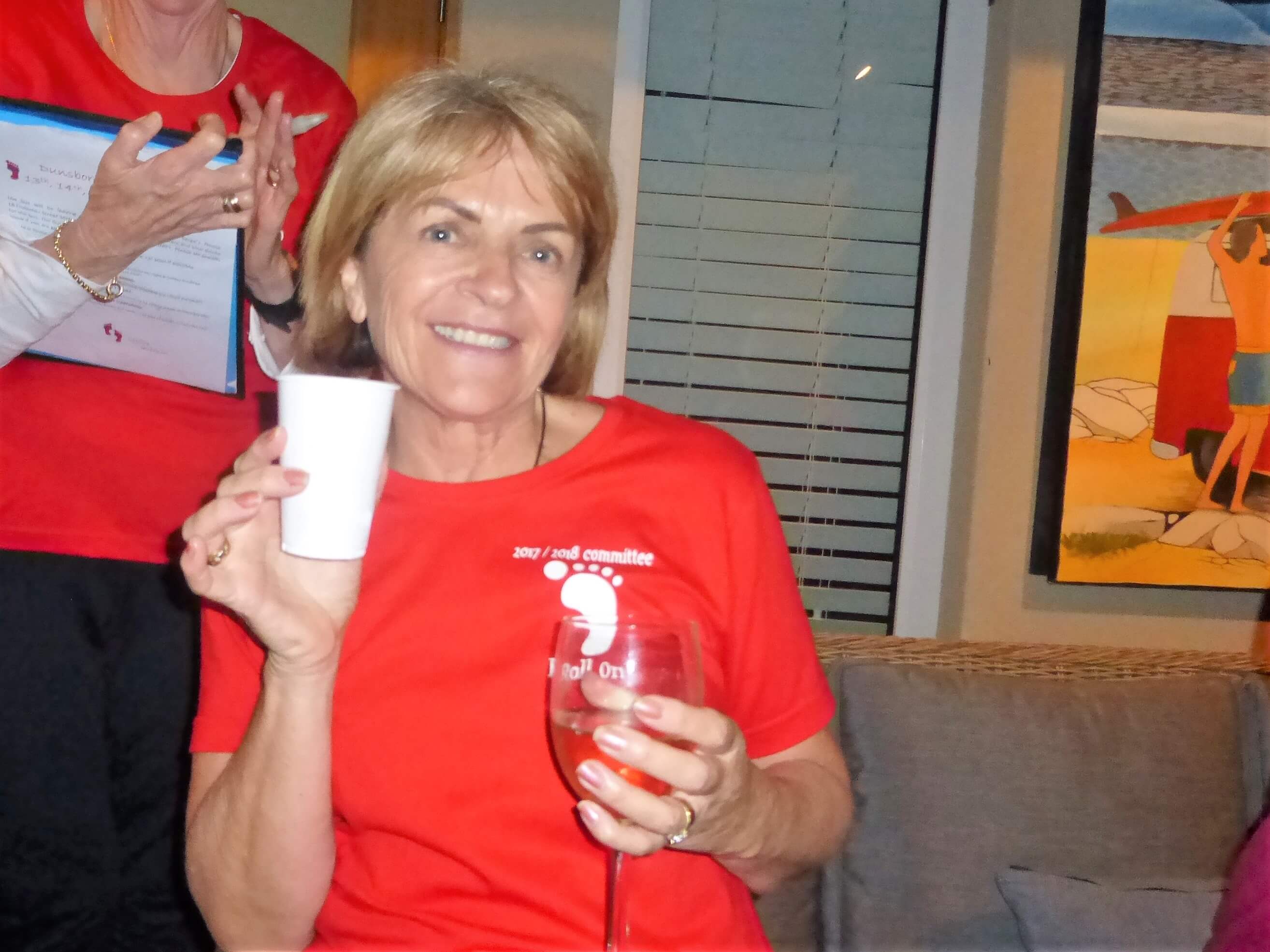 The weather forecast for Roll On’s run was ‘rain’!  We hadn’t had a wet run for a while….was tonight going to break the drought?

After much ‘encouragement’ stand-in GM Coaster gathered us all out the front.  Before handing over to Hare Roll On for run instructions our visitors Danya and Kentucky were introduced to us and Super was welcomed back after three months in sunny Broome.  We were all asked to keep an eye on the three of them and not lose them…..Super especially as we weren’t sure if all that relaxing, sunshine and ‘Broome time’ may have caused her to forget how to Hash J.  Roll On set us off after the usual instructions and a “bugger off that way”.

The night was glorious and the run was full of the usual falsies, checks, up hills and down dales. The Hash Goddess looked after us and there was only the lightest of rain at the end of the run when our hot, sweaty and heaving bodies welcomed the refreshment the light rain offered.

Back at Roll On’s the pack was in high spirits as they gathered around the eskies and the copious, delicious nibblies.  GM CTD had managed to join us in time to run Circle.  We charged our glasses and gathered in close to pay close attention to the Lady in Red….or should this be Ladies in Red as CTDs Committee were proudly wearing their brand new traffic light red committee T shirts and what fabulous shirts they are!!!  (They will be easy to spot in a crowd should you need to chat to any of them J)

Roll On and co-hare Kentucky were called forward to receive a well-earned down down for a well set run.  (Let’s hope that Kentucky enjoyed herself so much that she will re-join us!!!)

Kentucky remained in the spotlight and was joined by our other visitor Danya and Super.  (How good were we!!!!  We didn’t lose them and nor did they get lost???!!!)  Their down down was downed in double quick time and the ‘stage’ was emptied for our next important guest…a new member!!!  Sprinkler (she has come along with her own name J – we must find out how she earned it) happily accepted her Pink Goody bag and her down down.  Welcome to the best Hash Club in the world Sprinkler!!

It was a big night for the celebration of some big Special Runs:

The Big Pen:  Roll On escaped receiving the Big Pen for not submitting her write up from Zip It’s run to the Committee in time.  To cut a long story short it was Guide Dog’s fault (of course!).  Allegedly, Guide Dog was unable to assist with other aspects of the run due to a sore paw, so she (Guide Dog) offered to do the run write up.  However, it is yet to be received by the Committee.

Droopy Boobs were MIA as was Leopard who is the current owner of them.  The only nominee that was offered from the pack was Knee Hi who was so engrossed in the run that she slammed smack into a red post box which laid her out flat!  Our on-call Nurse Bumbo, checked her over before giving her the all clear to head home and rest before circle commenced.

Although the Mary Poppins, the current owner of the Bitchy Britches, was also MIA there were a couple of nominations offered.

Not too many tonight, I think everyone could smell Roll On’s delicious spag bol and see the lovely fresh salads (not to mention the copious amount of cake that was on offer) to delay the meal too long!!

A man with a stutter is visited the doctors. “D-d-doctor I c-c-can’t stop s-s-stuttering”.  Well, says the doctor “let me give you a check over”.  After giving the man the once over the doctor arrives at a conclusion. “The problem is quite simple, you have a 40 cm penis and the sheer weight of it is pulling your voice box down and thus causing you to stutter. Don’t worry though, if we simply operate and shorten if by half to get you a more normal sized penis, your stuttering will go away.”

So they do the surgery and all goes as planned. Two weeks later the man comes in for his check-up. “It’s amazing doctor, as soon as I woke up my stutter had completely vanished but I’m afraid I have a problem. My wife isn’t happy with my shortened member.  “Is there any chance that 20 cm can be sewn back on?”  The doctor replies, “I-I-I-I c-c-c-can’t s-s-see w-w-why n-n-not.”

As her vocal cords hard been well rested (and well lubricated by Matso’s) Super lead us in our song to close out the night and get into the food!!!