Moose’s run according to Shorty 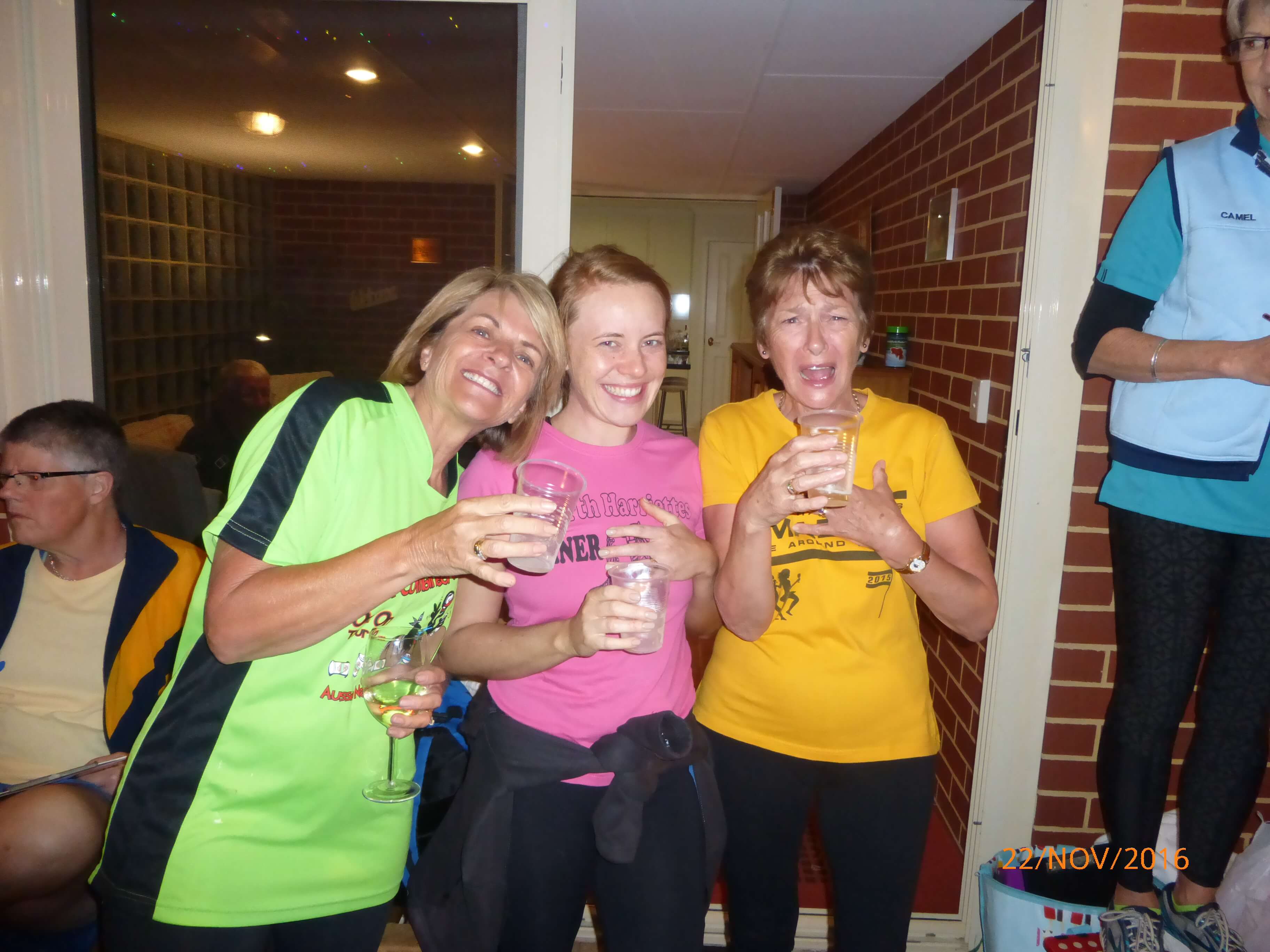 Arrived at the run site to the (now) usual skit practice.  Funny how many Harriettes seem to have 2 left feet – or maybe it’s just Ticket’s instructions!!

Any way enough of that nonsense it’s time for a run.  Moose as hare tells us it’s all on chalk and on the left unless it cannebe – some-one needs to translate!

Off towards the Warwick shops with a goodly number of false trails – funny how Roll On and Lone Ranger seemed to know which way to go although they did well trying to hide their inside knowledge.

Near but not quite past La Fitz’s before heading back towards Rambling’s old stomping ground before a nice long downhill to home.

Hare Moose and co-hares Roll On and Lone Ranger (what a surprise!) out for a drink.  Well done!

Returnees – Buttless, Jewels and PBVJ out for a drink

PBVJ gets another as a new member and is given a Perth Harriettes survival kit – annual, calendar, drinking vessel.  Seems she already has received a tshirt but is saving it for later!

Birthday girls Squirrel and Night Fill get a shared cake from Jewells.  Night fill seems to be thirsty or has she forgotten how to do a down down or are Ticket’s new songs causing some confusion!

Bitchy Britches – Super tries to pass them onto Tickets with a story about leading Lone Ranger astray during skit practice – she was doing too well or some such thing.  Squirrel has another nomination.  Cheapie sent her a lovely note for her birthday and suggested she would see lots of nuts for her birthday (a good thing for a squirrel) by coming to hash on Tuesday.  A surprise entrance by a Clayton’s Cheapie (Kebab with a mask) meant the BB go to Cheapie.  (Kebab was then heard to mutter – Bugger that means that I have to get rid of them now – didn’t think that one through did you Kebab!)

Herk Bear made an appearance to go from Suction to DIY for misdemeanours at Dunsborough.

Droopy Boobs – Kebab had them after Mustang passed then on due to ill health.  Cleopatra ended up with them for wishing Gorgeous then Back Seat happy birthday even if it wasn’t their birthdays.  “It was some-ones birthday wasn’t it”  Cleopatra was heard to mutter.

Consolations go out to Half Cut, Pot Hole and the rest of the family on the passing of her Mum.

Congratulations (and possible commiserations) to Squirrel on her promotion to head at East Narrogin High School.  You will be missed!  Tickets had a special sheep song to see her off.  Head Banger is taking over the role of Hash Flash.

Charges – Cleo and Call Girl off on a cruise

Thank you to Tickets for an excellent night last Friday at the Mustang Bar.

Tip’m – for break dancing or was it an epileptic fit

Blewie charged Wenchy for finding a dark spot behind some bushes in the park for a quiet pee.  Shame she didn’t look around as she was apparently mooning the street.  But no-one in the park could see her!!

Song to finish the circle before the usual rush to dinner and some quiet while the food is consumed.

On On to next week – don’t forget your donations of non-perishable, no alcohol food.