Pumpkin’s Halloween run according to Tickets 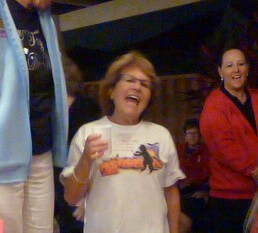 We were told it wasn’t going to be a Halloween run but Pumpy couldn’t help herself and decorated her beautiful backyard in ghosts, cobwebs and pumpkins.   Tip’m fitted in with her witches hat, I’m not saying anything to that.

Have to make mention of a particular plant placed strategically out front that took a few Harriettes fancy, it wasn’t a CACTI more of a COCKTI!  Xena in particular showed special interest.

Now the run started a couple of minutes late due to the fact the GM Camel had so far to come, NOT,  Shorty as usual was chaffing at the bit.  However, Camel finally arrived in time to introduce the Hare for instructions.  We were told it was going to be a short run and that the Hare had walked it, False Trails and all, in under 1 hour.…..Now I’m not one to call anyone a liar but it wasn’t a short run and no way did anyone do it in under an hour, unless we’re talking about those short cutting bas*@#ds, You know who you are!!!  The run in my opinion was well set and I saw lots of arrows, the long false trails really kept the pack together.   Well  done Pumpkin would expect nothing less from an experienced Hasher.

Birthdays:                  Tickets, I might add looking resplendent in her new Choir Mistress gown matching beautifully with her gold winged halo.  Pavlova by Stiffy

Bitchy Britches:       Roll On, well deserved in my opinion, criticising Tickets for spending her time in bed writing hash songs….to suggest that I don’t have a sex life, where does she think my inspiration comes from.

Sam on Nightfill for Soliciting on the run

Pumpkin talking in the circle.

Kebab for Impersonating an Ostrich with her bum in the air, possibly also soliciting.

Gorgeous charged Back Seat for drinking her wine when she was  asked to hold it.

Charge reversed when Xena pointed out that Gorgeous didn’t stipulate how to hold it and being in her bladder should qualify.

Topless tried to charge Squota   for impersonating another Harriette by telling her she could call her ANYTHING.   Charge reversed because by now Topless should have known the difference.

Special Commendation:                Sarge & Jewells for their outstanding contribution in organizing the Dunsborough weekend.   What would we do without them.

On On to Melbourne Cup run