Rambling’s run according to Wombat. 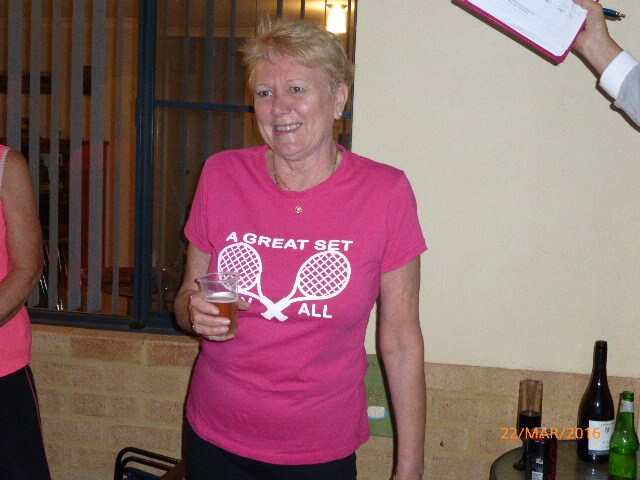 The night started with a terrific run on the freeway to RAMBLING’s squeeze GPS’ place in Canningvale. We got there with plenty of time to have a chat, open a nice red and relax……. perrrfect

The first person I met was RICE BOWL who was super excited at having a run so close to her home.

We had a couple of visitors – Maria and Sir Fumbles (who I think was their under a false pretence. I think he thought GPS was going to be there but he had run off to somewhere!!!)

It was a small group of gorgeous looking bunnies who gathered out the front to be sent hopping off on what was termed a short trail. Well!!!! Let me tell you. It was a short trail for me because I had to turn back but the rest of the group will give you a very different tail (or is that tale?????). Eventhough they hopped (some limped) back home a bit later than expected they were all very pleased with their effort for the night.

RAMBLING set out some yummy picks while the thirsty group got their well deserved drink. Circle was called and everyone had to pay special attention because the GM, Wombat, who was dressed like a rabbit was a bit horse (hoarse). Is this what is meant by ‘One animal drinks, all animals drink’? hehehe!!!!

Lots of celebrations tonight….. JAM TART, a fabulous photo frame for her 400 runs, STIFFY made her own delicious cake for 350 runs and TIP’M was presented with a slightly late basket of chokkies for her 951st run. It was happy birthday to MARY POPPINS and GG (both milestones….. can you guess????). The wonderful COMMANDO took one for our gorgeous GG who is having a wow of a time in SA.

The jubilation of being so close to home went to RICEBOWLS head, or tongue, as she suggested MARY POPPINS may need a zimmer frame and so earned a nomination for the Bitchy Britches. Our ‘sweet’ new member Loretta scored herself the Droopy Boobs for daring to suggest the GM was less than perfect.

There was general business about our 2000th (SARGE) and Bali Interhash skit (BLEW HE) then we were taken out in song so we could get down to the important business of eating, drinking and chatting. Apart from the delicious meal and sweets, the committee provided everyone with some extra Easter weight (chokkie eggs).

Hoping you all enjoy a very happy and safe Easter break.

OnOn to the Post Easter Joint Run with DEACONESS and Assassin.