Ex GM’s run according to DIY 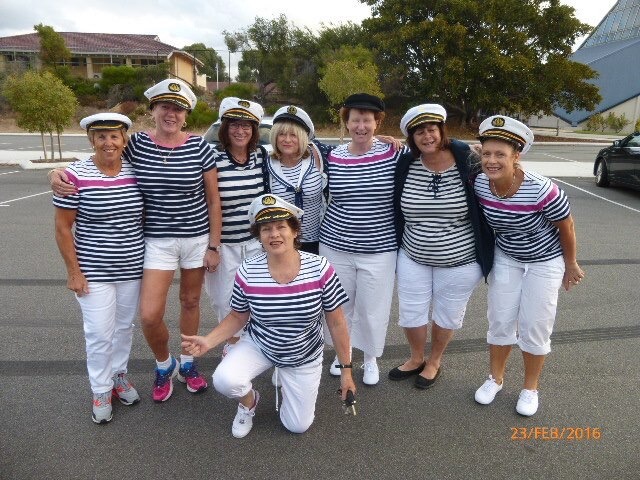 We were greeted by our mistress at arms “shorty”. First off, Camel as the clayton, clayton ex GM was fitted out with a ball and chain so she wouldn’t take over. We were then sent off on a very short run which featured streamers. We were told that the person who collected the most streamers would win a prize. Off went Blew He and a couple of Harriettes who I have NEVER seen run at all, Tutti Fruity being one of them! We then were treated to some blue drink with blue jelly, vodka and champagne. It was quite tasty. We then played a game of pass the can. The people who ended up with the cans had to have a throwing competition. Blew He won that one. Then some others had to get onto the flying foxes and drop the can as close to a target as possible. Cactus was the proud winner of that competition. It was then time for the circle which was run by Shorty.

Special runs: Tickets celebrated her 500th run – receiving a badge and a jacket.

Backseat had an impressive 400 runs – and was presented with a photo collage. Gorgeous “cooked” some cakes for backseat.

Squota had a birthday as well so we also had some yummy vanilla slice made by Super.

Charges: Tickets charged cookie for putting the mirror on the back of her new jacket instead of front so she couldn’t look at herself. Tip’m charged Leopard and Stiffy for leaving stuff at Rotto. Circle was then closed, being the shortest circle I can remember every having – run – by Shorty.

Best dressed on the night (although we were all covered up by jackets by then) was Liberty as a swab and Squirrel as the pirate. We then chowed down on fish and chips which was fetched by Jewels and Home James.