Blew He’s run according to Xena 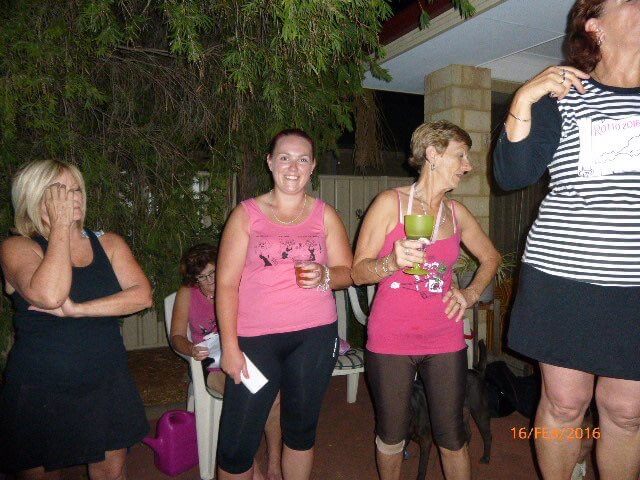 What a hot night for a run!!!! The temperature during the day had peaked at 40 and according to the car on the way to Blew He’s it was still 36!!!!

We gathered out the front to hear the directions from the Co-Hare, Wenchy as Blew He was out marking the run!! All on chalk, runners and walkers trails, then it was On On and b****er off! Was it my imagination or was the pack moving at a slower pace due to the heat, or maybe it was just me not enjoying the lingering heat of the day??!!! We meandered through the streets of Dianella checking out the old established and the new duplexes etc, bottle-necking at a number of checks whilst the energetic amongst us ran out the checks and determined the next direction. This worked until about 25 minutes into the run where our ‘hounds’ lost the scent of the ‘out’ trail. Whilst searching for the way forwards the home trail was discovered. Decisions, decisions….do we continue to look for the out trail or do we head for home? We all deferred to the GM for divine guidance. Her high GMness obviously took pity on our red, sweating …err …..umm….I mean ‘glowing’ faces and led us out of the wilderness calling ‘On Home’.

Once back home the drinks flowed and the nibblies were eagerly consumed until Circle was called.

Possible contenders had they been available:

Lots of GB (that’s General Business No No, not Goat’s Breath J) most of which is in Camel’s Droppings or on the website. Stuff that I don’t think is:

To ensure that you see all the images in the newsletters – please try one of the following in your email program:

Cookie delivered her joke in her usual style which left us all laughing as stand-in Choir Mistress Tickets lead us in ‘Who wants to see a miracle….’

The line was quick to form to get stuck into the delicious noodle, Asian style vegies and chicken as the aroma had been tantalizing us all evening, and with enough cakes/lollies to go round no one would go hungry!!!