Sarge’s run according to Blew He 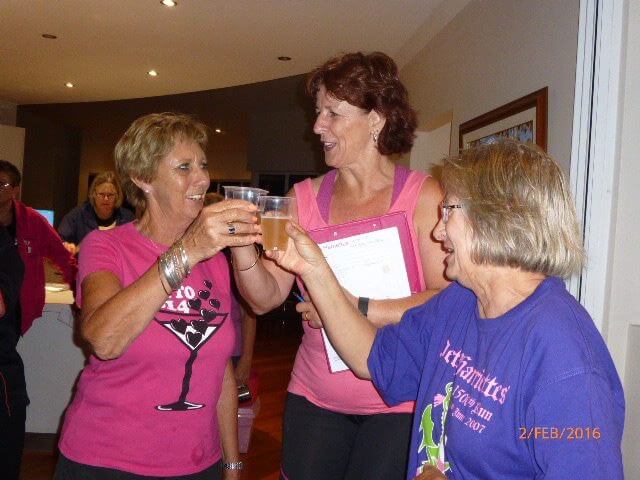 It was a great run by Sarge. Kept us going up and down many hills and along the coast line. Was well set with lot’s of arrows so we didn’t lose anyone. Even had us running through the local school and pulling muscles mounting…..the brick fence because they locked the gates on us!! Rude!

So after getting back all safe and sound and having a bit of a chat, we got on to the circle.

Sarge along with her co-hares Showoff and Wombat had a down down for their great efforts.

We then welcomed our visitor Close to Me and welcomed back our returnees Xena, Zippy and Backseat.

Special runs were Half Cut at 350 (well 351 really because it wasn’t actually celebrated on her 350th) and Buttless at 150. Congrats girls!

Then Call Girl and Blewhe were pulled out the front to celebrate their birthdays followed by a special mention to Aunty Val who was celebrating the big 70!! And what style she does it in too!

After a few contending stories, the Bitchy Britches went to Wenchy (from BallBreaker) who said to DIY in the car as they were running late, “Oh don’t hurry too much, Sarge will be going on for ages before they head out on the run!”

The the Droopy Boobs were awarded to Mustang from Occy. After mounting the fence and pulling a muscle which would mean no sex for a week, Mustang said, “Is that the punishment for going the wrong way?” whilst running over arrows on trail!!

Now on to charges! (where were they all for the night? I think there were a few too many good girls out there!)

The Loser of night was Half Cut who lost something at the Aussie Day Breakky Run.

And Sarge charged Cheapy and Kebab for not actually doing the run! There were a few rebuttals, something about checking out a pub or trail for some upcoming run that wasn’t this run! Guilty they all said!!

Then there was a lot of grasping at shitty straws to find some more charges, but nothing worth a drink so it was called to get on with it and OnOn!!

But not before a very heartfelt thankyou for all the well wishes from Roll On.

There was also a bit of general business in there, but you should all be reading your emails so you don’t need me to tell you what’s going on again 😉