Suction’s run according to Squirrel 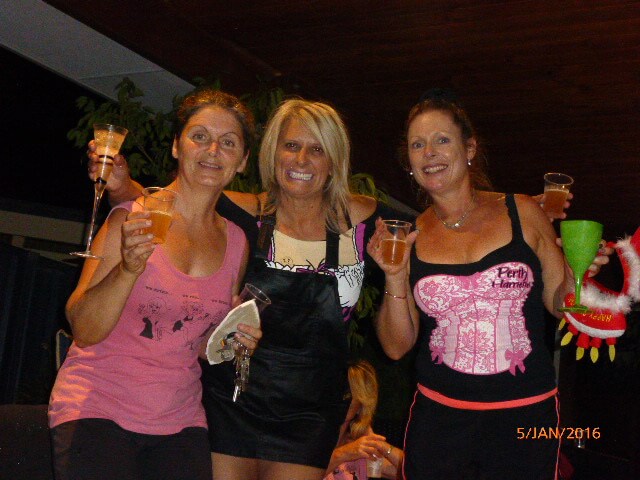 With a beautiful summer’s night in Greenwood for the run, clear sky and lovely venue provided by Suction, we were off. The trail took us in, out and around the eastern side of Greenwood up to Wanneroo Road.  With the best drink stop ever at Kebab’s with champagne cocktails, plenty of chatter and no hurry to move along.  The pack was in fine spirits to finish the run when we eventually left.

DIY spotted a tv display cabinet on the verge for sale and decided she would rest in it at the prompting of those around her. We were soon enough back to Suction’s to gather for snacks, chats and the circle lead by our illustrious GM, Wombat.

First was a down-down for the hare and co-hares Suction, Mustang Sally and Kebab.

Next was a drink for our visitor Tracey who is a friend or fiend of Ned Kelly and Kebab’s, however she wasn’t to get her photo on her own as Bumbo photo bombed it and got a down-down, pre-empting her next to be charge as a returnee.  Once that was sorted, Bumbo and Ned Kelly had a down-down for being absent for so long.  It was great to see them back looking so healthy and happy.

With a special run for a special lady – Any Name, who has reached 650 runs (having taken almost double the possible time to reach this number). Kebab came to the party with a tray of beautifully decorated éclairs in celebration of her mum’s achievement.

Birthdays YAY, more cake. We had Jewells, Bumbo (for another drink…) and Even Stevens.  Mention was made of Ball Breaker who was absent and who was also having a birthday this week.  What a collection of sweets we enjoyed.  Rocky Road for Bumbo, a warm and freshly baked Aunty Val orange cake for Even Stevens and beautifully arranged violet crumble creation from Home James for Jewells.

The next special event was the GM having reached that special 469 runs and showing us she knows how to do it. Crafty offered her advice as she is the one with all the great bedroom tips, who recommended that Wombat just needed to grab it by the nuts…

Cleo got to keep the Bitchy Britches as everyone was too nice and no one deserved them. Droopy Boobs are in Occy’s care and she was not there to pass them on.

General Business up next with lots to cover.

Charges are next with a few down-downs for the following:

Some sad news firstly, with the passing of Cookie’s son-in-law and a card is being sent on behalf of the club. Secondly with the passing of Roll On’s mother/Lone Ranger’s grandmother who is part of our clubs history having come to the runs many times over the years on her visits from Scotland and is the reason Roll On got her name.  She couldn’t go anywhere without her mum.  Our deepest sympathies to both families and will wrap them up with our love and care as time allows.

The circle finished with a joke each from Head Banger and Suction which involved Rocky City members being bogans and knickers.