Squirrel’s run according to Thrifty 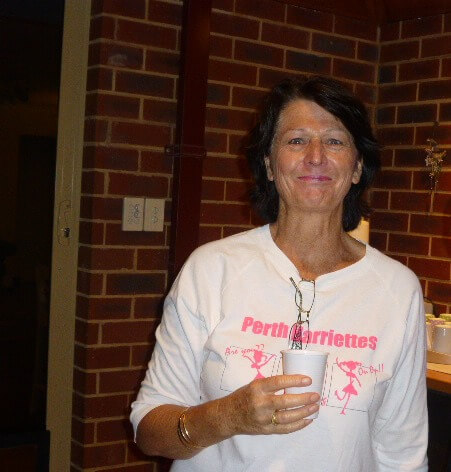 What a glorious evening it was to be running (ie walking) around Ocean Reef. Not too hot, not too cold.  I do recall Squirrel telling us as we set off that it wasn’t a particularly long run, mmmm, wasn’t particularly short either. There were obviously a few false trails up some hills, which thankfully I missed, I seemed to reach the start of each hill just as everyone was coming back down. Woohoo there is a God as my knees and hills are just not a good mix.  All in all it was a lovely way to spend a Tuesday night, taking in the sights of some beautiful homes and even more beautiful beaches.

Let the circle begin with Squirrel (and no co-hare) called up for a down down. I did hear someone mention the length of the run and that it wasn’t short to which our lovely Squirrel replied that it is only a ten minute walk each way to the beach and back with a few squiggly bits in between. It was obviously those squiggly bits that added to the run. It was an unanimous  decision that it was a fantastic run. Well done Squirrel.

Our visitors were then called up for a down down. Welcome Heavy Breathing, Tinkerbell, Berry and Marlene.

Returnees were next Teapot, Moose, Guide Dog, No No, Xena, Sam and Pumpkin (who in actual fact was Night Fill). It did make me feel better knowing that I’m not the only who gets Night Fill and Pumpkin mixed up occasionally.

Cheapy achieved the great honour of doing 400 runs and was presented with a lolly tray even though she said some rubbish about her ‘ass’ not needing anything, yeah whatever, what about the rest of us? She chose not to receive the photo frame as she is now living on the road and really has no where to put it.

Birthdays were next with Leopard, Ball Breaker and Suction being called up. All were presented with beautiful cakes which went down very easily after dinner.

Ball Breaker received the Bitchy britches for making a comment about the visitors looking better with the cups in front of their faces when the photo was being taken.

Droopy boobs are still MIA with Occy having them.

Charges were next with Jam Tart being charged for hanging out with Serena too long – apparently she is becoming a bitch now too (not sure exactly what that was about). Cheapy did the charging.

Sarge was charged because Crafty has ‘never seen anyone dig a grave without a spade before’ because of the way her speech went about our upcoming 2000th run.

Tinkerbell and Heavy Breathing were charged by Wombat. I didn’t get all of the story but it was something to do with Heavy Breathing’s heavy breathing and Wombat not wanting to know about their sex life.

The circle was coming to a close with a joke from Cookie, sorry can’t remember the joke and a  joke from Cheapy which was about a bloke who started chatting up a woman with ample cleavage because he couldn’t find his wife and figured as soon as he starts talking to her his wife will appear. I only remember that one because I also saw it on Facebook.

Dinner was a delicious roast beef with veges and salad and rolls. Great feed. Lots of delicious cakes and lollies were passed around for sweets.

Thanks again Squirrel for a wonderful evening.