Jam Tarts run according to DJ 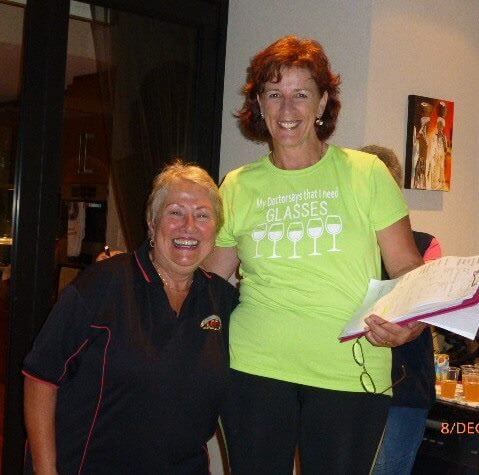 A good turnout for run 1941 at Jam Tart’s and the weather was just right. Wombat (who sounded a lot like Shorty!!!) called us out to start our 7pm run.  Annette, aka Netta, a virgin runner, was called out so we knew who to look out for on the run and then it was over to the hare who pointed us in the run direction.

A good false trail managed to pick up some late starting stragglers and off we went around the lovely streets of Karrinyup. Special treat seeing Wombat’s house all light up with her chrissy decorations.  They looked fabulous.   I did however hear a few comments like “shit I haven’t even got the Xmas tree out of the shed yet”.  The pack held together well with a few “SCB’s” parting company to head home when they hit Jackson Street.  Returning home the runners were warmly greeted  with a chorus of kookaburras in full song.  I’m sure they were really laughing their box off thinking “what are you crazy women doing”.

Circle started with Jam Tart called out for a down down, for a great run, with her co-hare Wombat.  I thought Jam Tart deserved another drink for smart thinking …  when she said she had mapped out the run on her computer, had offered to set it with her co hare, who thankfully said “please let me do this part for you”.

Stand in Choir Mistress, Head Banger lead us in song so that Jam Tart could stay busy in the kitchen. A place she says her dog was traumatised at seeing her in. J

Next we had virgin visitor, Netta, out for a down down and she did her sister, Old Slapper, proud when downed her splash like a seasoned Harriette.  She is off to live in Ballarat and is now keen to join a club there.  She should be well established and waiting to greet us with open arms when we hit Nash Hash in 2017.

It was great to see lots of returnees. Biro and Goodyear both got their shit together to return after long absences, No No who said she finally got off her arse to give herself a much needed Harriette fix after working too hard, and Nightfill returned to us after a fabulous KL holiday.  We tried to get Stiffy out but she said “nup” she has set a record and had come for the third week in a row, so no longer missing in action.

Suction nearly got to keep the Bitchy Britches when she finally remembered she had them.  It was clear that she did not think they were high fashion enough for her to actually wear on the run let alone for her to know which was the front and which was the back.  But lucky for her Ball Breaker charged Lone Ranger for saying “I am not hot (think she meant heat hot) because I am not old”.  Was she implying that all us that had jackets on must be old??? What a Bitch…  Then she topped it off by commenting “you lot will all be dead before I am old”  Ball Breaker had a good came back with “fat girls live longer than skinny bitches”.  Lone Ranger took the Bitchy Britches saying she gave up on fighting with us old farts….  haha the young ones just can’t handle the heat.

The absent, Occy, is till holder of the Droopy Boobs, however Old Slapper was called out for a drink and a quick lesson on what you get the Boobs for.  Hope she listened well. J

No No and Nightfill were called out for missed birthday drinks (sorry No No we must have eaten your cake back then..)

Suction was charged for no hash gear, and no being the holder of the bitchy britches does not constitute wearing hash gear especially if you don’t wear them.

Nightfill was charged for stating that the run was set by a man!!.  She figured this was so because the run had so many hills and plus she had spotted Wombat’s hubby leaving as she arrived.  But hubby was just dropping off a phone and as Jam Tart said “what is she talking about, my computer did not show any hills on the run”.

Old Slapper was charged for being a cheeky bitch for saying to the group already home and seated, when she got back from the run, “you lot have not moved off your asses”.  Well, we certainly had.. the eskies were at the other end of the verandah….

Cookie told another great joke. A prompter for those like me that can never recall a joke.

Golf cart turned over, pretty young nurse asks if old guy is ok and to come into her place to get fixed up. He says “my wife won’t like that”.  The conversation follows this pattern until the nurse finally says “well if your wife wont like this, just where is your wife”.. punch line “under the golf cart”….   its all in the telling….

Well done Jammie, it was a great night and topped off with many offer to help you reduce your wine cellar. Anytime, really any time…