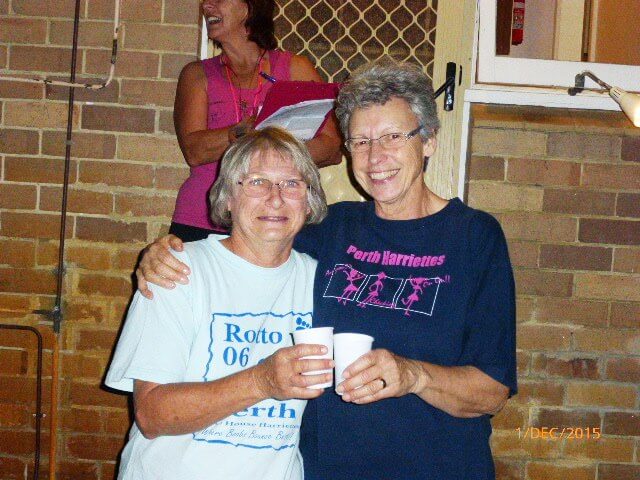 The first day of summer was a beautiful Tuesday evening when the Harriettes gathered at Show Off’s house in Yokine for our run.

The horn was blown at 7.03pm and AGAIN at 7.05 as the girls were slow to make their way to the front of the house for instructions.  The Harriettes finally set off at about 7.10pm and were told by Show Off that it was all on chalk – so no bush.   That is as far as I can positively say because everyone knows I don’t go far!!

The girls reported back to me that it was a fantastic, well set run with lots of arrows and you could not possible get lost as it was so good!  Well done Show Off!    Wenchy even said that it was “one of the best set runs I have been on in ages as there were lots of arrows!!”   The walkers came back after about 40 minutes and the runners about 50 minutes.  Zippy forgot her medic alert bracelet which indicates she is allergic to penicillium.  Remember that girls for future!!

We had yummy food of sliced beef and salad for dinner thanks to Show Off and Crafty.

BIRTHDAYS: Teflon Tart  &  Kebab. Anyname made a wonderful ‘Bum” cake with lollies for Kebab.  There were lots of yummy cakes.

NAMING: Yvii was named “Old Slapper” by Tickets but I can’t remember why.

There were no Droopy Boobs or Bitchy Britches.

CHARGES:     Tickets charged Deaconess for getting her doctor’s appointment wrong – wrong week!!  And she paid $3.50 for parking!

Old Slapper charged with not wearing a hash T-Shirt

Seagull charged with not having a hash T-Shirt on also

Kebab ‘lost’ her car at the train station!!

EVENTS INFO:   Our Christmas Run on the 15th December at Tuart Hill Junior Soccer Club, Nollamara will be themed ‘Christmas Down Under’ so get your thinking caps on for costumes!!   Only financial members will be allowed entry so pay your subs if you haven’t already.  Don’t forget wrapped present to value of $5.00

The girls were reminded that the AUSTRALIA DAY RUN (26TH January) will be a breakfast at 8.30am at Kebab’s house.  Bring your bathers.!!!  Keep looking out for reminders.

Sarge spoke about our 2,000 Run on the 4th February 2017 and advised that it will take a lot of organising and asked for Harriettes to join committees such as:-  Finance, Photos, History, Haberdash, Community

South of Perth – Have their annual Chrissy Run through streets of Freo on 17th December.  See the email & flier previously sent.

Cookie and Sarge both told jokes before we were led in song to end our circle.

E&OE  (Thanks to GG for taking over the writing!)