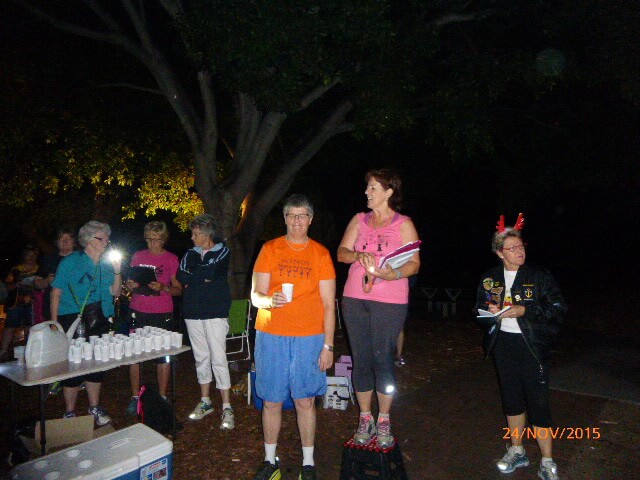 Great run with a good turn out from most Perth clubs. 20 virgin Hashers to the Salvos run and 1 virgin runner called George from Geraldton. We all headed off from Tomato Lake for a 6km – nearly

9km run (depending on how many false trails you did).

The friendly Salvation Army representatives, Lisa and Peter, were there to collect the goods – and what a hashtastic amount of donations it was! It turns out that Lisa’s father was called Ding Dong and her Aunty was called Tinkerbell. “Aaaaaah” said the crowd, “We all know Tinkerbell!” But Sarge (our remaining founding member) stepped in and informed us it’s not OUR Tinkerbell, but another Tinkerbell (birth name “Jess”) who set the original Salvos run 20 years ago. Wealth of useless/useful information is our Sarge!

We had visitors from Derby Hash -Trippy Taco and Pissy Royale – that’s a long bloody way to come!

Birthday girls Smallgoods and Teflon Tart had birthday down downs.

The GM from Hamersley crashed the circle having a whinge about doing woman’s work as he was asked to carry a cake when he could have been drinking. Then he charged Smallgoods for asking what was the Hamersley GM called… Assassin. Assassin called for the young, well the ones who were in primary school 20 years ago, there were about 10.

Wise Crack from Freo charged the 3 car owners who would have had their cars locked up for the night by the Ranger if she hadn’t asked the Ranger to wait until we found the owners. Wisie then took the down down for being a good sport as the car owners didn’t front.

Screwy, not wanting to be too far from the action, told of his adventures driving with Miss Puddles and the phone saga, over the lack of wine for the Derby Girls and Tite-Ring. From what we could tell there didn’t seem to be a problem. Screwy sang Tite-Ring the “pain in the Ass to your Mother” song.

Puddles charged Leech for being a Softcock for dancing and showing the moves some-where, sometime, some-how.

There was some general business and lost property, these items were old Hash banners, which seemed to get some people very excited and a Hash fight erupted. Tite-Ring was very impressive and won 2 banners but when the Freo banner came up, she was no challenge for Buttless and the mighty Screwy,… well Butless seemed to have a good squirrel grip and held the Freo banner high!

Some random Male Hasher entered the circle calling for Kebab. In his hand he held a 12x5inch flesh coloured penis. Kebab was very pleased to see her friend but was a little surprised as last time she saw it, it was purple…

GM, Wombat called all GM’s in to the circle for their Hash songs:

Great run and night had by all – well done Wombat and Committee and all Hashers for making the 20th anniversary of the Salvo’s run a great success.