Roll On’s run according to Crafty. 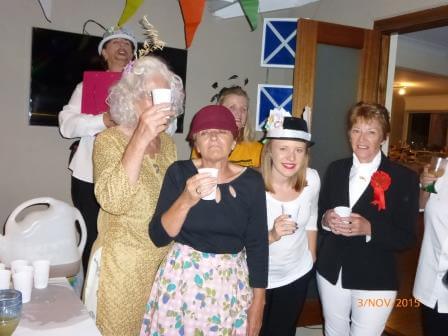 Perth Harriettes annual Melbin Karp run took place on the same day as the other much less famous event with a similar sounding name. Both events showed just how good women can be at anything!!!!

The fully refurbished Beaton Track was festooned with lights and balloons for the occasion and all race-goers were welcomed by GM Wombat . A few liquid refreshments later, and the pack was ready to run when the GM declared that any starters who fell during the race would be shot. The race got under way and the pack kept together all the way around a gentle circuit through Padbury. The finishing line was quickly reached with no casualties.  The winning jockey, a woman of course, was congratulated and everyone thought the horse did ok too.

It was thirsty work, so the champers flowed some more. Triple J, bookmaker supremo, took bets on previous Melbin Karps from 1990, 1977 and 1974. There was much excitement as we watched the races on the big screen. And the winners were Leopard on Kingston Rule, Rambling on Gold and Black, and CTD on Think Big. Delicious hors d’oeuvres were served between races.

Fashions in the Field attracted a lot of interest. A colourful parade of old grey mares, but no fillies or perky tits in sight. Triple J (former bookie, now fashion critic) declared everyone “was Gorgeous”. Not sure if that meant they used to be gorgeous, or whether he meant we all looked like our own Gorgeous who was racing in the States.  All very confusing.  However, the following mares rated a mention for their ingenuity and amazing fashion sense. Moose, Tip’m, Super, Home James and Shorty.

The circle was called in usual Harriette fashion.

The formalities finished with a joke from Ball breaker which was a bit sick.

After that we all indulged in a sumptuous and delicious high tea. A veritable feast prepared and served by Roll On and stable hands, on beautifully laid tables, using multi-tiered cake plates displaying a great array of tasty bits. This really did set a new standard for Tuesday nights!

Thanks to all concerned who made this a great night in true Harriettes style and class.