Banger’s run according to Aunty Val 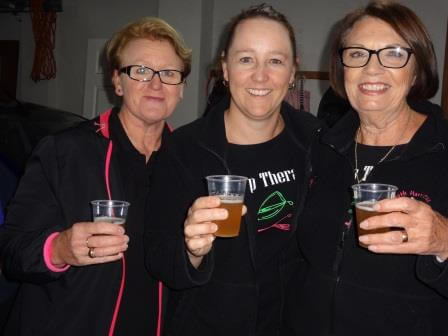 What a welcoming sight as we arrived at Banger’s lovely home with pretty coloured lanterns hanging from the tree by the driveway.

The run kept the runners running and the walkers in touch with the pack (aided by Meg) as we toured the many parks and lanes of leafy Greenwood while the turn-backs made it safely home before us. Guide Dog was caught visiting a friend en route and was nearly eaten by a not -so-friendly dog.

The circle began with splash not a bang as our Hash Splashes sent the first drink to the floor-how did they get away without a charge for that?

Hare Banger was ably assisted by co-hares Oasis and Cactus setting the run-a virgin experience for Cactus though no lack of experience for those three in downing a drink. Or two!

Butless has observed Sphinx running extra well so she can keep up with Octopussy and the West Coast boys!

Our GM Wombat just made it in time as her choir mistress, Jam Tart, realised they’d gone too far when they saw the lights of Geraldton. Jammie escaped a charge as Wombat didn’t fancy walking home or for leading her driver to drink.

Jewells will take orders for Dunsborough shirts even those not lucky enough to be going.

Finally the Salvo’s Run is 24 November. Donations of non-perishables can be made now but

NO CHRISTMAS CAKES as they contain alcohol. I bet my teetotal grandmother didn’t put it in!