Ball Breaker’s run according to OTT 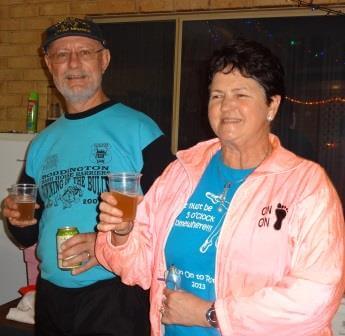 Huge thanks to the Hare Ball Breaker and her lovely helper Coops (co hare). Lovely run.

There were no visitors that we saw but they may still be wandering around Marmion (it’s a pretty nice area to wander in).

No Bitchy Breeches so GossipGirl will have to keep for another week.

Droopy Boobs went to ShowOff, she accepted with pride as she tried to relight the sparkler that went out on one of the beautiful birthday cakes.

Charges: Puddles for talking to someone called Precious on the phone. Wondering is that THE Precious that we know and love or just a term of endearment.

Other business: All the girls going to the India hash had a drink.

Great run around the lovely suberb of Marmion. Lots of false trails, which worked really well to keep the pack together. Quite Hilly at times, a bit of rough land. Basically a bit of everything including a tunnel, although didn’t see that myself (being at the BACK). Shinx and Occy had already fought about it long before!

Lovely meal after, lasagne. Thanks BB.

On On to my place next week.