The AGM According to Wombat 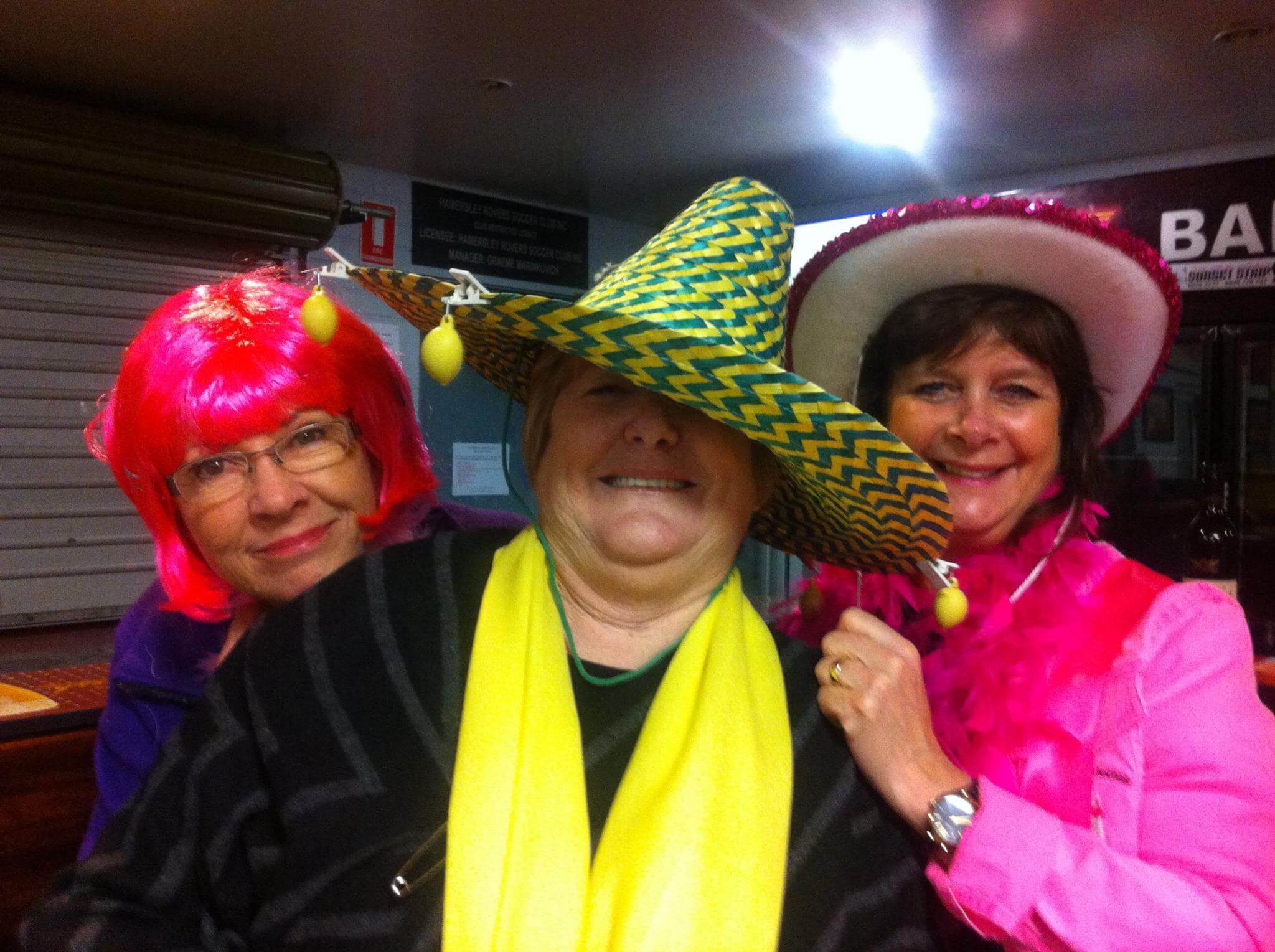 Deaconess and DJ had opened the door to the hall 6 hours earlier and were just about knocked out by the smell but when they tripped across the floor and their soles, (or is that ‘souls’? ), were left behind they knew they were in trouble. Cleaning before set up wasn’t part of the plan but now it was. True Harriette style, sleeves rolled up, bucket, mops out and the place was sparkling by the time I got there… thank heaven!!!

7:00pm @ the hall: We Are Ready to DELIGHT Turkish style – Cheapskate, BUBBLE Champagne COCKtail style – Rambling, SLING Singapore or Gin style – Lone Ranger or Wenchy then PUNCH Paradise style – Mary Poppins each Favourite Cocktail who posed at the door for the Flash. They came in to admire the beautiful decorations, appreciate the easy listening music and wet their lips with their delicious tequila sunrise.

I decided the cocktails were more inviting than the damn cold air on the oval so the GM, Gossip Girl, took the hounds out for a walk right through the practicing football team. I didn’t hear of any successful tackles but you know us Harriettes don’t like to showplace our skills.

Although we only had one cocktail waitress, Coaster, available to serve the Cocktails, Show Off and Thrifty, everybody had a COCKTAIL on their person all night. Now that’s perfection to me!!!

There were Cocktails from afar…..

Others near but colourful….

Some were a bit fruity – Banana Cocktail – Headbanger; cute and cuddly – Fluffy Duck – Anyname; out there – Dirty Hippie – Leopard; and of course those arty farty, amazing creations – Between the Sheets – Cookie; Harvey Wallbanger – Mustang;

Some looked like a dream – a Golden one – Half Cut;

Some were living a dream…

Luckily we had a skipper on hand for all us Cocktailed Out Harriettes – Miss Muffett (a mocktail). You go girl!!!

The comida was chowed down, the beber flowing and the muchedumbre were getting restless when Sarge decided to embrace Crafty and Show Off thus spewing her glass of orange juice, (supposedly), all over them. This turned Crafty from Bloody Mary to Fruit Punch and Show Off from a Crowing Cocktail to Duck L’orange.

While they were sorting themselves out, the champagne sculling competition between a member from Manhattan and one from Team Mexico was well under way. The winner was decided later in the evening.

ps Did you know the entertainment dj was actually one step ahead of us tonight? He brought 3 mikes with him so as not to have a reHash of the 1900th Run issue where some Harriettes, (it wouldn’t be nice to name Tip’M, DJ and Suction so I won’t), were not only caterwauling down the mike but cat fighting over it too. Did you also know his name is Scott??? Hmmm!! SCOTT stuff all to do with his real name I think. Anyway, back to the night….. DJ was organising the DJ! but alas he was winding the girls up with jokes: “Why does a Chinese woman walk with bowed legs????” Hope you were there to get the answer because I wasn’t ….damn it!!!! Scott (hehe!!) finally refocussed and started the intro to….. TEQUILA!!!!

OMG, it’s happening. I’m minutes off becoming the ‘38th or so’ Perth Harriettes’ GM…….That’s when my brain went to mush and all that skit practise became worthless. Whilse GG was doing a magnificent job centre front I was stuffing up the first step which bumped On Heat off the stage and lead DJ & Sqota the wrong way. I then stepped back on Commando’s toes, and forgot to keep my head down so Xena, Zip It, NoNo and DMD could toss their hats. And that wasn’t the part I was most nervous about. It was the mike, I had to talk and introduce my amazing Moonshine Committee for 2015/16. Choir – Jam Tart; Flash – Coaster; Splash – Crafty, CTD, Show Off; Horny/ Web – Lone Ranger; Cash – DIY; Joint Mistress PR – Kebab; Haberdash – Deaconess; Trail Mistress – Thrifty; Hash Bash – DJ; and finally the big unveiling…… On Sec – CAMEL. Camel was a definite favourite as the applause was deafening and the muchedumbre were very excited. Yay!!! It was done and now time to cut the delish carrot cake, keep the bogeying going and calm my thumping heart down.

Well!!! All the Cocktails eventually started to lose their fizz and bubble and the night gradually flowed away.

A massive THANK YOU to GG’s 2014/15 Sunshine Committee. Each and every one of you did a fantastic job offering the Harriettes different activities to attend, runs to enjoy and fun to be had. You’ll be hard shoes to fill but I feel very sure the Moonshiners will take up the challenge.

ps: Results of Champagne sculling competition: Both parties left the venue a bit wobbly but quite presentable. Then the member from Team Mexico mooned her team partner in the carpark as they were leaving. Preciosa, tenga picara senora. Team Manhattan was heard to say, “Team Mexico just can’t hold their champers but in fairness, that may have been due to Team Mexico being a margarita!!!