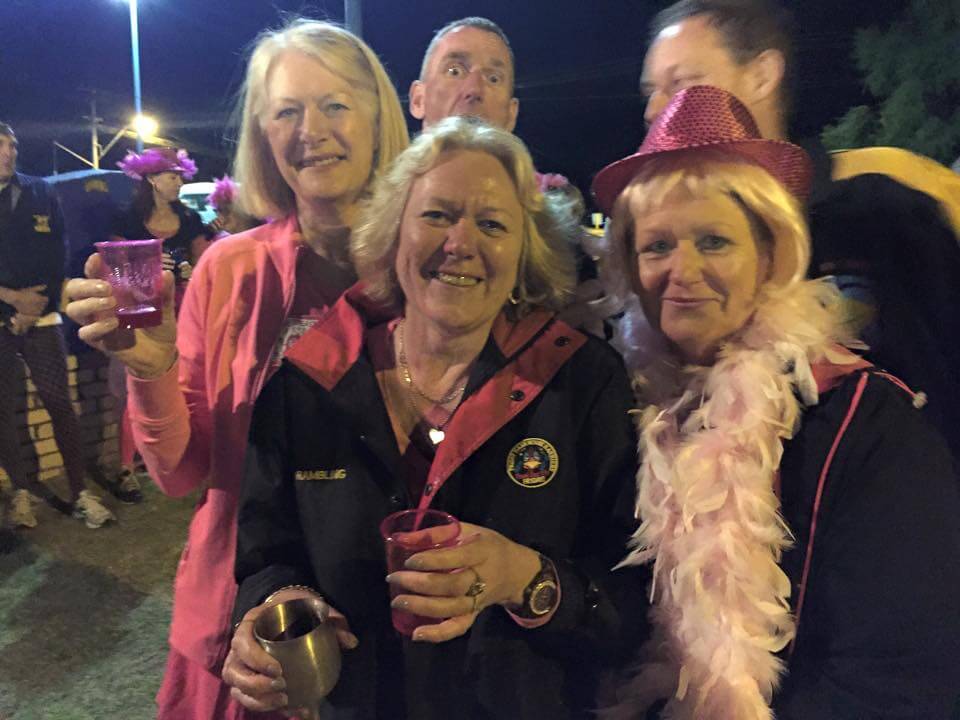 It was a great turn out on a fabulously clear, cool but not freezing and a slight breeze kind of night. “Pink” was in abundance (she would be proud of us) as we set off. The runners must have had a really good run because on the “On Home” they came, heavy breathing, but still running, past me. The walkers had a good stretch with many walkers doing a marathon pace – Rambling, Wenchy and Guide Dog… must have been champagne at the on home.

GM, Titty aka Tite-Ring called us to circle, flashing her “box” and we as “visitors” joined in the congratulations from all to Rocky on a great run.

We had Lana from Sydney Breast Cancer Association (fab of her to come all this way for Rocky’s run) to give us a small info talk. Did you know that they do not get any government funding for the research of breast cancer?? Amazing, when we all seem to know someone who has/had it or know of someone that knows someone with it or that has had it.

Then came out Rocky’s “Pink Breast Run” song (sung to the tune of the Micky Mouse song):

Here we are to help the cause

We’re here to help the best way that we can

Hashers run together, raise awareness and have fun

RA (Raunchy) called out Dick Doctor for not wearing something pink (shame oh! shame) but hello……..let’s call out the rest of the West Coast boys – none of them in pink !!

GPS came out but “oh dear” he lost his words and all went quiet so we have no idea what he was going to say.

Next Tampon and Plastered were called out for the boob contest. Kowalla, after a breast-feeding test, gave a win to Plastered.

Screwy called out Anything and Thunder to be named as old suffragettes. This was a very long winded way of finding out what else happened in the year the suffragettes chained themselves to fences to win the female vote. Well of course in that year of 1912, the year of the suffragettes, well it seems the Titanic sank and they were expert witnesses. I think I missed something in there but it seem the women that chained themselves to fences, doing no cooking or cleaning must have been bogans and were not Rocky City bogans?? Something along those lines.

Kowalla came out to check Screwy’s balls in no uncertain terms because really he was sprouting a load of shit that seems to go nowhere.

Titty was named as the best looking Rocky City GM all year, a point the we all agreed on. There was then a hash quiet and then all club songs were sung.

Then it was on on to fabulous food, lolly basket and celebration cake.

Well done Rocky. Great night and we trust that the Breast Cancer Foundation will benefit greatly by your efforts.

Footnote: Rocky City raised a magnificent $1,696.00 on the night!!!!  Well done one and all for such fantastic support for a VERY worthwhile cause.