Palace Run According to Wombat (and guest scribe AssAssin) 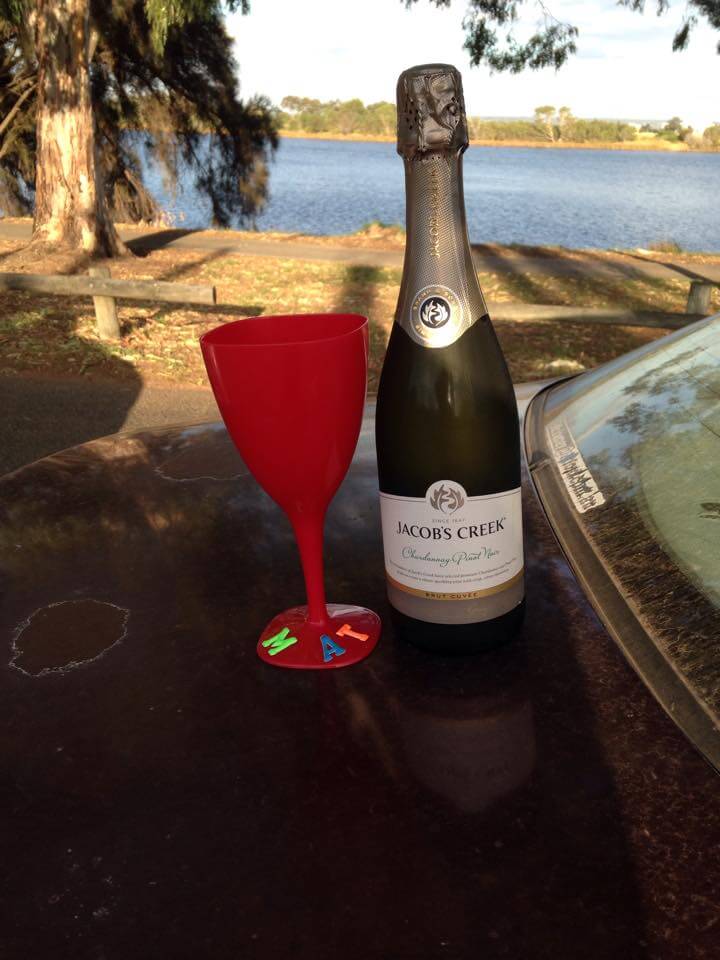 Preamble: (by Ass-Ass-In) (Sorry Ass-Ass-In but the foreplay to this chapter has been censored)

Upon coming early, (I believe this has been a complaint about Ass-Ass-In before), I spent my time wisely gleaning much valuable inspiration from an array of exercise stations funded by the public purse and clearly designed by some English Literature graduate who could not find a job teaching the next generation of English Literature undergraduates!

Elements of the WA combined Hash clubs with a sprinkling of interstate visitors start to arrive. Halfway starts collecting the cash for the curries (***more about that to come) C-man sells his raffle tickets and we set up the bus. In no time at all it is 6:30 and time for the fun to begin.

Yours truly (Ass-Ass-In) on the crate for the start…good practice, eh! A polite greeting to the Senior Harriette at the run. Sorry, Wombat, that is most important type senior not the oldest type senior. (phew, lucky he explained himself). We have two things in common…..cries of ‘It’s the tits’ from some Perth rabble….not sure which of us should feel insulted. (I wasn’t, not often I get recognised as having any!!!)  No, it is that our GMs are both ‘missing in action’. No! Not that kind of ‘action’, they are in different places (or so we are told), and we are both competing for the prize of ‘most ridiculous committee hat of the year’. Is it the one with the dandelion (Sunflower) on the front or the two sizes too small ‘Hello Sailor’ option? Opinions are divided. (We all know the Sunflower is sensational, so, ‘Bye Bye Sailor’).

MelAdjusted takes the crate and sends the pack on their way for 6.5 km of shiggy, bush, and back alleys he says, before rushing off in his truck to the drink stop. Most of the H4 team stay back, (because really, they can’t run!!), to help finish setting up and attempt in vain to reduce the 900 gazillion mossies in the park down to manageable numbers.

Stop leaving and you will arrive

Stop searching and you will see

Stop running away and you will be found

Let’s hand it over to the RA with a strict instruction of ‘No ‘c’ words’. (Is that why there was no cake???)

7:30 – Don’t be too long in the circle, the curries will be here soon (Songs are sung, circle is going round and round and round….. like the Curry pot stirrer!!)

8:00 – They have left the factory (in Mumbai) and are on their way…….. just a bit longer (a call all good Harriettes understand…..)

8:25 –  OK! Circle over….. They are refusing to answer Halfway’s calls (Wow!!! A first, not only for Hashers but Peeps Australia wide …. The Indians won’t answer the phone!!!) Hashers practice noose knots on a length of rope found in the park….. Some of the fat b*stards start foraging for grubs and nuts! (Possibly their own)

9:00 –  Vehicle arrives, curry is served and all is forgiven…Halfway restrained from booting deliveryman up the Punjab…..

The meal might have been late but the run was fun, the peeps not creeps and the night alright.

You are on a horse, galloping at a constant speed.

On your right side is a sharp drop and on your left side is an elephant travelling at the same speed as you.

Directly in front of you is a galloping kangaroo but your horse just can’t overtake it.

Behind you is a lion running after you but, luckily, not gaining any distance.

What must you do to safely get out of this highly dangerous situation?

Ass-Ass-In get your drunk  off the merry-go-round!