Pumpkin’s Run According to Shorty 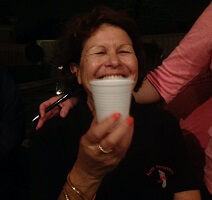 As I arrived I heard Pumpkin complaining “Who sets a run in November and has to worry about rain?!” Luckily it didn’t rain till we were all tucked up in the circle. But before then there was a run to do. Out the front and a few instructions from Pumpkin then we were off. It wasn’t just “round the block” as Pumpkin threatened but up hill and down dale though Sorrento. Although it seemed to be more uphill than down! Lots of looong falsies kept the pack together with the walkers even doing some of the falsies. And all the falsies seemed to be uphill!! We turned for home once we got to the sea and the long hill up Hepburn tested the dedicated runners. Well done Pumpkin!

The circle was called by the GMs new whistle – hope she doesn’t swallow it when she has trouble balancing on the crate.

Pumpkin has a drink for a well set run and organising the rain for 8.30pm rather than 7.30pm.

They all get a down down for their travels.

Roll On is AWOL (something about a grandchild’s birthday – poor excuse) but Suction and Ball Breaker where both nominated for their misdemeanours. Just what they where was lost to me in the general frivolity.

To all those who helped make the Help Marlee Communicate High Tea such a success. From the Instigator (Jewells), her band of merry organisers (Liberty, Squirrel, Home James, Pumpkin, Shorty), all those who contributed food and drink (special mention to Jam Tart who contributed Moet champagne and then proceeded to buy most of it back in the Silent Auctions), all those who helped set up (special mention to Moose) and all the Harriettes who bought tickets and bought their friends along to make the day special. Uplifting was the comment made!! All up we raised $13,000 which will go a long way to get the machine (and software) to help Marlee communicate! Well done everyone.

Circle finished with the usual song and then tea of Pumpkin’s broccoli salad with potato bake and chicken. Yum….and did I mention cake for desert!

On On to the Salvo’s Run.