The AGM According to Buttless 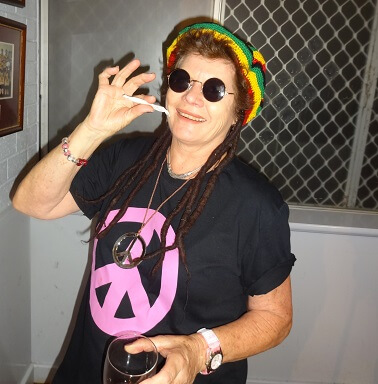 With much anticipation, the beautifully adorned Perth Harriettes all gathered at Carine ready for a glorious night of ‘High Tea’.

The members were greeted with cocktails, (that you had to pour yourself) but not in beautiful crystal glasses, into JAM JARS!

Why was this? Because the out-going Committee were ‘High’ on drugs, not tea!   Here were we, done up to the nines (some I think, in their Grandma’s outfits) and there is the Committee dressed in black with peace signs and dreadlocks, smoking dope! What is the club coming to!

Anyname called the pack together for the run, welcomed everyone along and then sent us off to chase Wombat as ‘Live Hare’ for a stroll (and run) around the park…

Back to the hall where Anyname quickly took to the stage, determined to make the most of her reign. She welcomed our new member Captain Knockers, an ex Sydney Harriette and long time friend of some of our more senior members.

There were a number of Birthdays:

After our High Tea meal the lights were dimmed. The out-going Committee joined on the stage to perform a Hash version of “Here for a Good Time”, complete with Reefers and Dreadlocks.

Anyname then thanked her Committee for a wonderful year and great support.

The stage was cleared to make way for Gossip Girl, our incoming Grand Mistress. Her opening address: “I am your Sun Goddess, F**k Winter!”

With Commando’s assistance the new Sunshine Committee was introduced:

Adorned in Sunflowers they burst into song “You are My Sunshine”

But wait. Had Gossip Girl stuffed up performing her first important duty of announcing her Committee? What about the On Sec? At that point GG, learning quickly the privilege of her position, blamed Commando. Then quickly, Wombat was called out and introduced as On Sec.

The formalities over, it was time for music and dancing, and of course more wine.