AGM “Come Dressed as a Song” Run according to Wombat, Cheapskate and Kebab 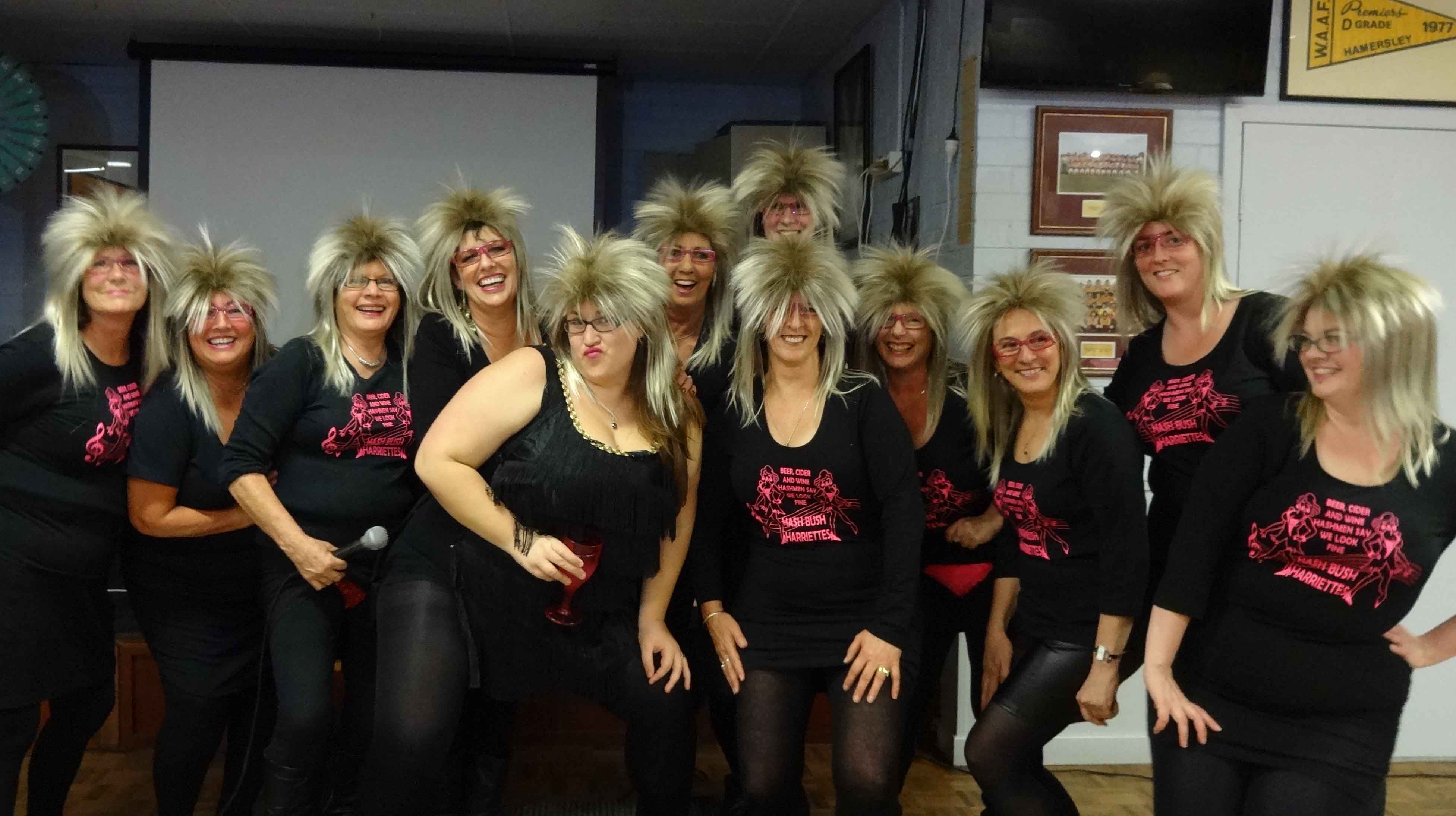 AGM – “Come Dressed as a Song”

We were called to “The Best Disco in Town” for a “Celebration” “Coz! Baby we were born to Run”.

As “Sisters, Doing It for Ourselves” we were out to get “Satisfaction” and be “Simply the Best”.

Let’s not make it a “Long Run” and definitely no “Running Up That Hill’ as we wanted to “Get Back” and “Watch the boys watch the girls while the girls watch the boys who watch the girls go by” before those boys got really “Physical” on the footy field and we started “Feeling Hot! Hot! Hot!”  And as any good Harriette knows, we needed to “Raise Your Glass” full of “Pina Colada (but we weren’t getting caught in the rain)“, “Red, Red Wine”, “Champagne Showers” and “We Love to Have a Beer with Duncan” or anybody else for that matter!

Comet called “Hello! Is it Me You’re Looking For?”

Although there was “No Charge” for the outgoing committee there were definite charges for these:

Home James:  for providing us with more than “Mashed Potato, Yeah! Yeah! Yeah!”

And we were “Missing You” but she’s “Closer to Our Hearts” our very dear “Angel” Muddy “Love Lifts Us Up” and her mate Ballbreaker (“I’ve been Everywhere Man!”) Sam (“Wish You Were Here“), Tip’M (“Dancing Queen”) and Squota/Aunty Val (“Holiday”).

“Sing! Sing A Song! Sing out Loud, Sing Out Strong”

Those who got their two minutes (or even less) of “Fame!” and received Comet’s “Bang a Gong”:

“Heard it through the Grapevine”          Rice Bowl, Nightfill (well Nightfill “James Herd it”

“When the Saints Go Marching In”       Seagul, Banger, Liberty, Oasis

Sarge started us in song with “We’re Climbing up the Sunshine Mountain” and then there were those “I’m Not Singing a Song”:

Pretty in Pink was OTT, Purple People Eater (Cowpat), Blew (Blue-He), Eye of the Tiger (Coaster), Phantom of the Opera (Home James and Shorty), (Jagger) had the “Moves Like Jagger“,  Cheap Wine and a Three Day Growth (No No), Fairies Wear Boots (Puddles), Candy Girl (Rations), Money, Money, Money (Thrifty), Witch Queen of New Orleans (Xena), and another “Witchy Woman” called Rambling, Crafty came as Susan Boyle…(Yes she got the theme wrong but as she said – her name is Crafty!!), Chop Suey….I’m a Rock Chick in a Hard Rock World, Commando was a Rhinestone Cowboy, Debb was “Lucy in the Sky with Diamonds” (with lots of “Cocaine“), Freebie…”Livin’ next Door to Alice…Alice Alice who the F is Alice?“, Black Widow (Goodyear), Forever Young (Harlequin).

First you were made to “Sing for Your Supper”, then you were invited to “Be Our Guest” and “Eat it, Just Eat it” but there weren’t any complaints as the food was “Yummy, Yummy Yummy”!!

On On was heard through the “Dancehall” and 12 “Sensational” Tina Turners charged onto the dance floor for a bit of “Nut Bush”/ “Hash Bush”, all the same. There were plenty of “Oooobladi Oooobladaaahhs” from the “Girls! Girls! Girls”!!!  Happy snaps taken and the all important announcement of the “New Kids in Town” in quiz style “Fashion” by our new “Leader of the Pack” GM – Anyname!

Now it was your “Turn, Turn, Turn” to “Boogie Oogie Oogie” There wasn’t quite “Murder on the Dance Floor” but there were some “Dancing Queens” others “Zombies”, some “I got Rhythm” others “I can’t Dance”, some “Footloose” others “Shake Your Booty” whilst some were “I’m still standing” others “Lean On Me” but all were having the “Time of Your Life”

Calls of “I’ll be there for You” and “Happy Days” ended another successful Harriettes night with many waking up with “The Worst Hangover Ever!” but great “Memories“… well some anyway!!!