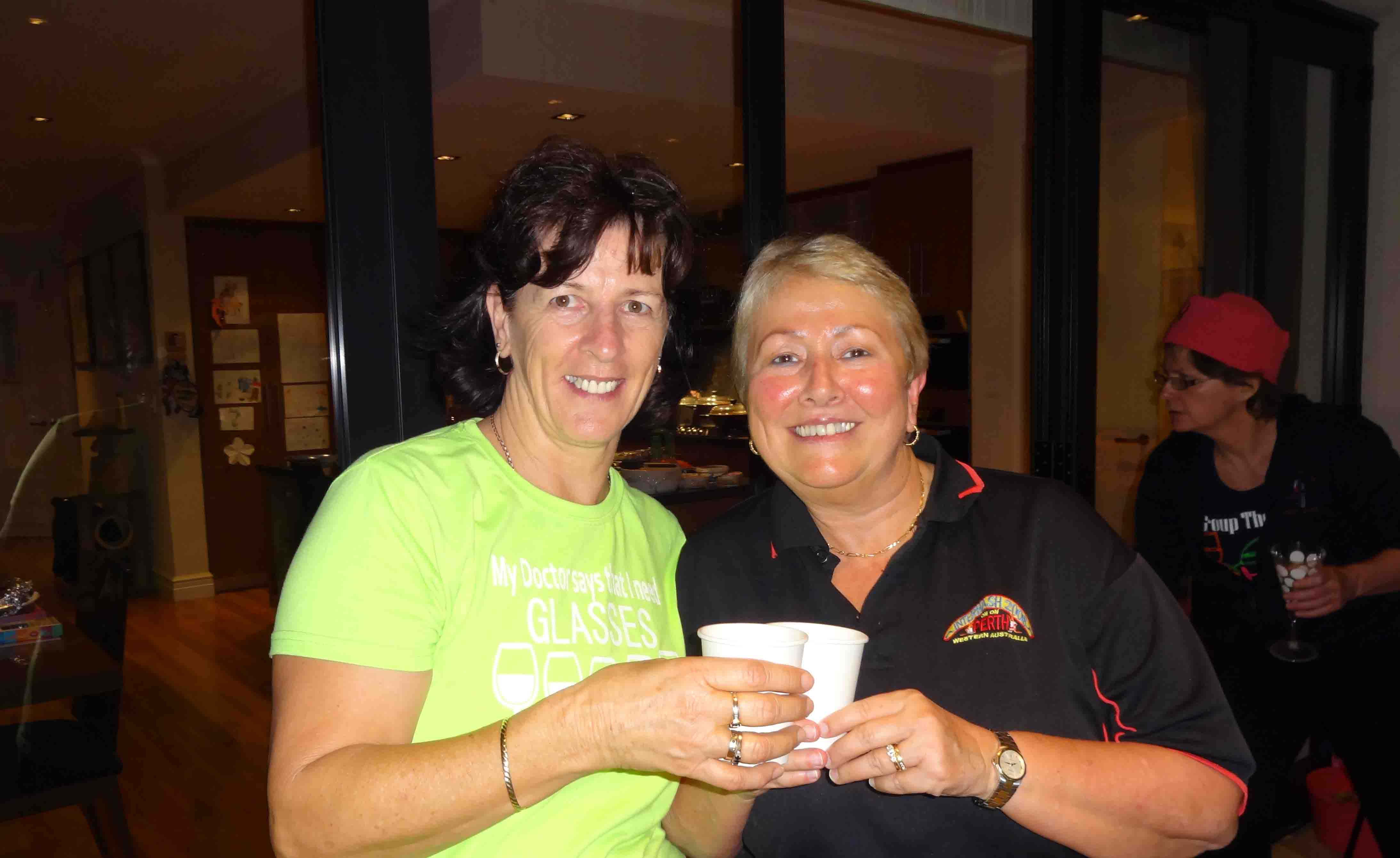 Jammy’s run was a gooden (as we all knew it would be) weaving in and out the streets of Karrinyup – lots of lovely properties to admire and a good size pack.

Hooters from Melbourne joined out group for the night as did Natalie and Lynda.  We also had a male amongst the group and he wasn’t any ‘garden variety’ male he assisted with the cooking for the night (the fish was delicious!!) and he was a former West Coast Eagles player, the one and only Karl Langdon. (Frankly, I am not sure what he thought he would be in for on the night.  He looked a little nervous when he was called up for a down, down!!)

La Fitz and Freebie also joined us again after a short absence and we welcomed backHorney after about four years absence and she hadn’t changed a bit – let’s hope we see her at many more runs in the future!!

To complement the wonderful food there were some yummy cakes to acknowledge some special runs:

Tip’M’s amazing effort of 850 runs and Occy slaved over a hot stove and even boxed the cheese cake up in a Cheese Cake Shop box as a special touch.

The piece de résistance of the special runs for the night was Seagul’s 1069er!!!  Her comment when presented with the usual drinking vessel for anything ‘69’ was, “I’m not drinking out of a dick!!!!’

But wait there were more cakes…..

Stiffy celebrated her birthday in true Harriette style with a sensational cake from GG.

There was quite a bit of banter when nominees for the Bitchy Britches were called for!  Leopard nominated Occy for being a blocker on the run but Rations just couldn’t button her lip as this charge was explained to the pack and Rations said, “Leopard would stop at the top so don’t worry!!”  Needless to say, Rations was the worthy recipient on the night.

The Droopy’s were AWOL so no hand over nor stories to report.

Time for the Charges:

Backseat charged Gorgeous or not being able to see past Arzy

Leopard was charged for being nominated for the Bitchy Britches

Anyname charged Bumbo who when on the Blue Dress Run happened to catch up toKebab sprinting along and Bumbo asks Kebab, “so which Hash Club are you from?”
Kebab tells her that she is from the Perth Harriettes.
Bumbo says, “Ahhh, you must be from our club then!”

Coaster charged Backseat and CTD for talking through the circle.

Karl Langdon was charged for cooking the fish

Jammy was charged for hanging off a ‘nice young man’.

Naming:
Freebie thought that as Agnes had been with us since January and was yet to be named because she had been so quiet that she should be named Mouse.  As we already have a Mouse. After a bit of banter the Scottish accent was applied and she was duly christenedMoose (the Scottish word for mouse.)

Last night to update Archive details for the next Annual

Venue for next week’s run, the XGMs Run – Sarge’s Factory, 66 Roberts Road,Ossie Park.  NOTE: the gate will close at 7pm

Bus Bullsbrook Run:  See Sarge ASAP is you want to be on it

Hamersly Lunch Friday for anyone that wants to go
•