Pink Breast Run according to Wombat 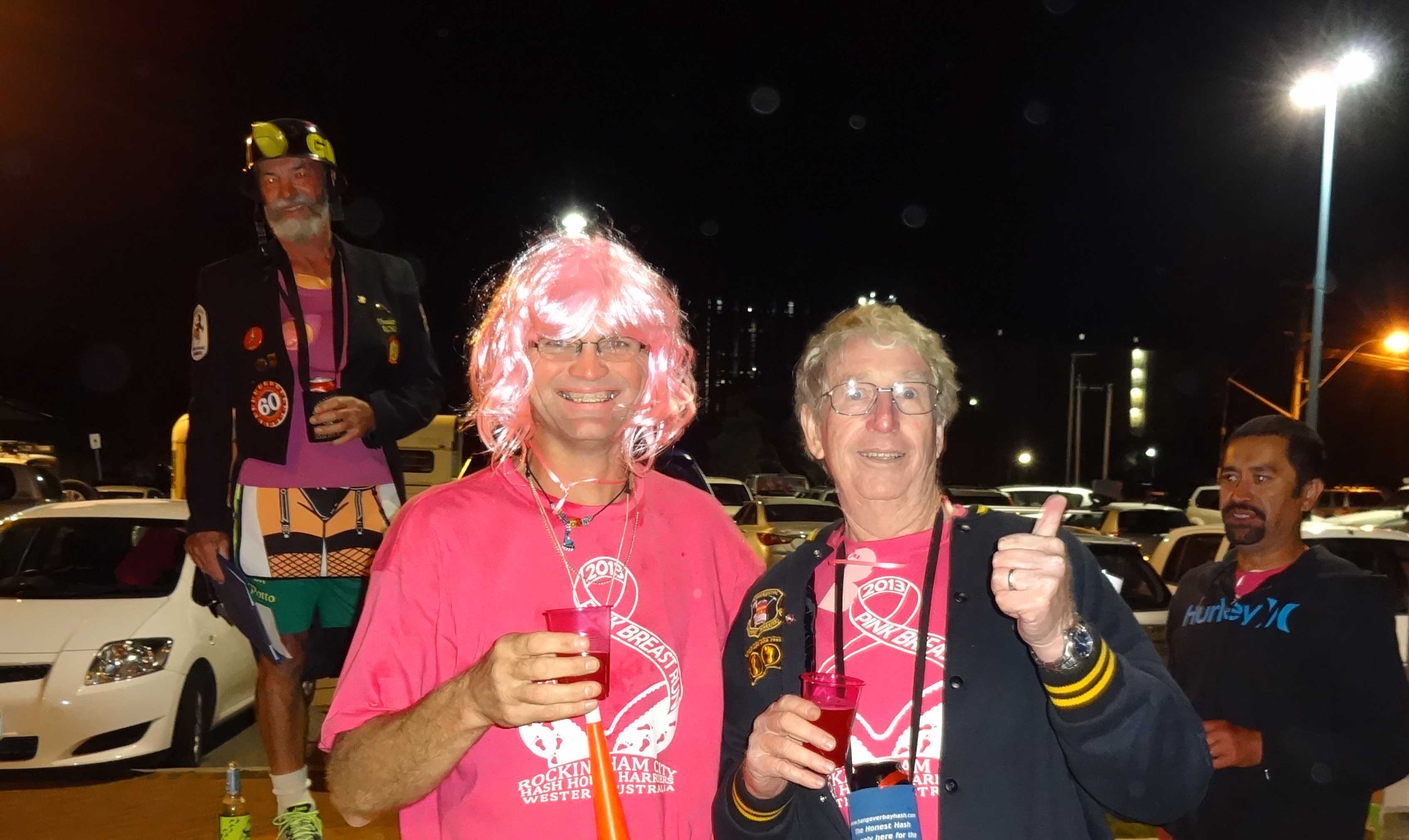 The idea of supporting Rocky City’s Pink Breast Run was proposed at Cheapskate’s Run and heartily approved by the majority……..true to a Harriette’s word; a large contingent made their way to Wells Park Rockingham and enjoyed a really wonderful evening.

I decided to catch the train and then Rocky City bus which was quick, safe and fun. Thanks to Aunty Val (Liberty and Oasis too I think) who worked out all the logistics to get us there by the fabric of our pants.

Everyone was rounded up…..Pink breasts, purple breasts, big breasts, little breasts, you name it, they all pointed themselves to the Hares, Baboon and Uncle Fester. A very nice little spiel was given and then Uncle Fester called OnOn….the wrong way of course. Hahaha!!! Dare I say, from what I’ve heard, a typical Hashman…up the wrong pathway?

Once we found trail it turned dark, wet and very sandy…..1k of beach trail certainly sorted the runners from the funners. The rest of the trail took us further up the beach front then wound us inland to where we met up with the walkers. (Although, some were just lurking in the bushes, pretending they were doing something good, weren’t they Cheapy? hehe!!!) A bit of cross country back to the carpark and we were all done and ready for a well deserved drink.

The Hares were given a down down for their well set run/ walk and all the committee were called out to be acknowledged for the effort they’d made…. the group sung heartily to show their appreciation. Then GM’s were made to front and centre. Of course our stand-in GM Anyname received the greatest Yahoo!!! of all the clubs.

Whoremoan and HJ were announced the winners of the Boob Comp and I can’t remember who won the raffle, even though I asked about a dozen times….mmmm..old timer’s.

We were then entertained with a demonstration of how a Mammogram works…….Monogram was groaning and writhing in agony before the vice was even placed anywhere near his jewels and I noticed other Hashmen wincing and crossing their legs or did they want to go to the toilet and were too scared to leave the circle???

Three volunteers (well!!! they went out the front anyway) were treated to a breast test and even though they didn’t get felt up how they’d have liked to, they did earn themselves a bottle of wine to compensate. I hope the Harriettes administering the test washed their hands before serving our delicious meal of soup, chicken and salad and cupcakes.

And on that note, the evening was wound up by Shorty, making sure we were on that bus and home before we turned into pumpkins…….sorry Pumpie, not that we don’t all aspire to be you J.

Typical of 3H’s there were also the 3 F’s…… fun to be had, funds to be raised and friendships to be made.