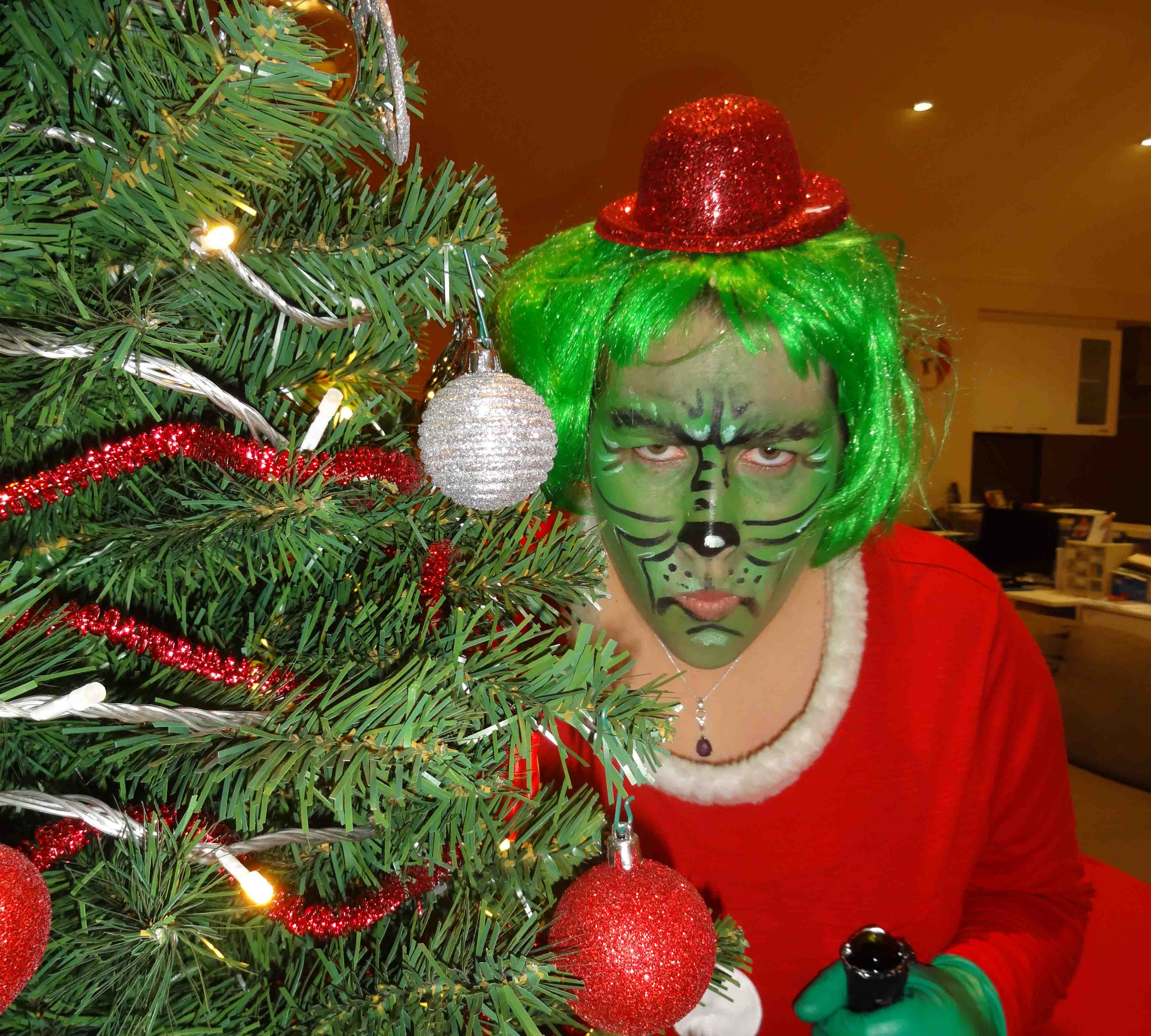 We said it was going to be a Christmas with a difference – aren’t you green with envy?

READ ON for a very cleverly scripted write up by Wombat … CHRISTMAS WITH A DIFFERENCE

Inside a snowflake exists the magical land of Whoville where the munchkinlike Whos live. Rejected by the Whos as a child and living in spiteful seclusion for most of his life is the GRINCH. All the Whos love Christmas but the Grinch is a nasty creature that hates Christmas and plots to steal it away from them. A small child, Cindy Lou Who, (not unlike some of our grand Harriettes/Harriers) decides to try to befriend the Grinch and change the festivities from empty commercialism to a meaningful celebration.  AND SO THE NIGHT BEGINS……..

The gate’s shut as tight as the Nun’s ®Klundt, not a single committee Grinch in the hunt

The *Who-manity starts moaning and grumbling, tis 7o’clock, let’s get the Hashers ‘a stumbling’

+Anyname orders – ‘Put your bags out the back’, ++Kebab instructs….”Leave your pressies in the Sack”

#Arse-About lines you up for a fizzy, green drink, then ##Firefly buggers you off to Sarge’s, the next link

~~Sarge and ~Cheapskate were on the ready, “Line up, get your plates and keep them steady.

You can have one and only one for each of you, anymore and you’ll be likely to spew”

Bring your glasses for a fill of splash and pox, then smile as you follow our very own ∞Matchbox

Onon to ∞Wombat’s burrow you go, don’t look at the Christmas lights all bright and a glow

And don’t get too used to the happy sight, you’ve still got a freaking long way to go tonight

The Whos young and old sit down to a feast, was it Prancer, Dancer or another road kill beast?

Evening folks, mind if us Grinch squeeze in? You might want to scooch over or we’ll wipe your grin.

Down the hatch went the salad and wraps, followed by beer and champers that filled the gaps

∑Mary Poppins pulls her whip from her magical bag, then cracks “Off your arses, on trail and don’t dare lag”

The Who-manities sob “These glaring lights, we’ve had enough”, all we want is some comfort and good stuff

So on to Jam Tarts they ambled and wandered, is this a night they think they have squandered?

ΩDeaconess says with a wink and a nudge, “One man’s chocolate fudge, is another’s disgusting toxic sludge”

The rum ball’s a winner, the icecream sandwich hard to beat, all in all the sweets went down like a treat

The Committee cry out “These Who’s are hard to frazzle, let’s give them a night of razzle, dazzle.”

Handover the pressie sack goes up the squeal, did you forget…… it’s Christmas we steal

Did you get your knickers in knots and whirls, nah!!!We wouldn’t do it, we love you girls

Ahhh!! was the sigh and then a little giggle, now let’s get down and boogie and wiggle

Blast the music from here to kingdom come, Christmas with a Difference is triumphant and fun

What more could we want for Christmas; do you agree? Than a night of fun with OUR HASH FAMILY

Grinch: I am the Grinch that stole Christmas… and I’m sorry. Aren’t you going to cuff me? Put me in a choke hold? Blind me with pepper spray?

Harriettes: No!!! You can’t hurt Christmas because it isn’t about the gifts or the contest or the fancy lights. It’s about what you believe in, what’s in your heart, your spirit and how you live each day.

Wishing everyone a very Merry Christmas

®KLUNDT: family name that means: extremes in fortune, health and spirituality. Very versatile, idealistic, intuitive, offer service to others……..a HASHER THROUGH AND THROUGH

*WHO-MANITY: the munchkinlike people who live in the magical land of Whoville which exists inside a snowflake (and any Hash smoking, crazy people’s mind).

**COMET – the shining star in all Harriette’s lives (but is shooting through with Adam, the first and foremost amazing man on earth who ditched Eve)

+ANYNAME: what you call those amazing things you can’t explain or the lover you can’t identify!!

++KEBAB: a scrummy bit of meat Hashers like to eat, especially after a few splashes J

#ARZE-ABOUT: exactly opposite and definitely got the drinks Arze-About: not amber or alcoholic (hehe!!)

## FIREFLY: so called for her conspicuous use of her LIGHT to attract mates (or HORN to lead Harriettes)

~~SARGE: part of a ranking system, but what does the word mean? Private means: to keep secret, Major means: BIG; General means: all-purpose, SARGE MEANS THE FREAKING BOSS OF PHHH

∞ MATCHBOX: the union of a match (the tool to start a fire) and box (tight little klundt to burn inside)

∞ WOMBAT: eats, roots, shoots and leaves (As long as their name’s Paul)

∑ MARY POPPINS: a magical Hasher who performs her tricks on the Web

∑∑ JAM TART: very easy little sweeties, one of the ways to a Hashman’s heart is through his sweet tooth…

ΩDEACONESS:  a non-clerical order which sees to the care of women in the community. Deaconess traces her ROOTS back to Jesus…..(I wouldn’t have thought you were a day over 50)