Puddles Run according to Topless 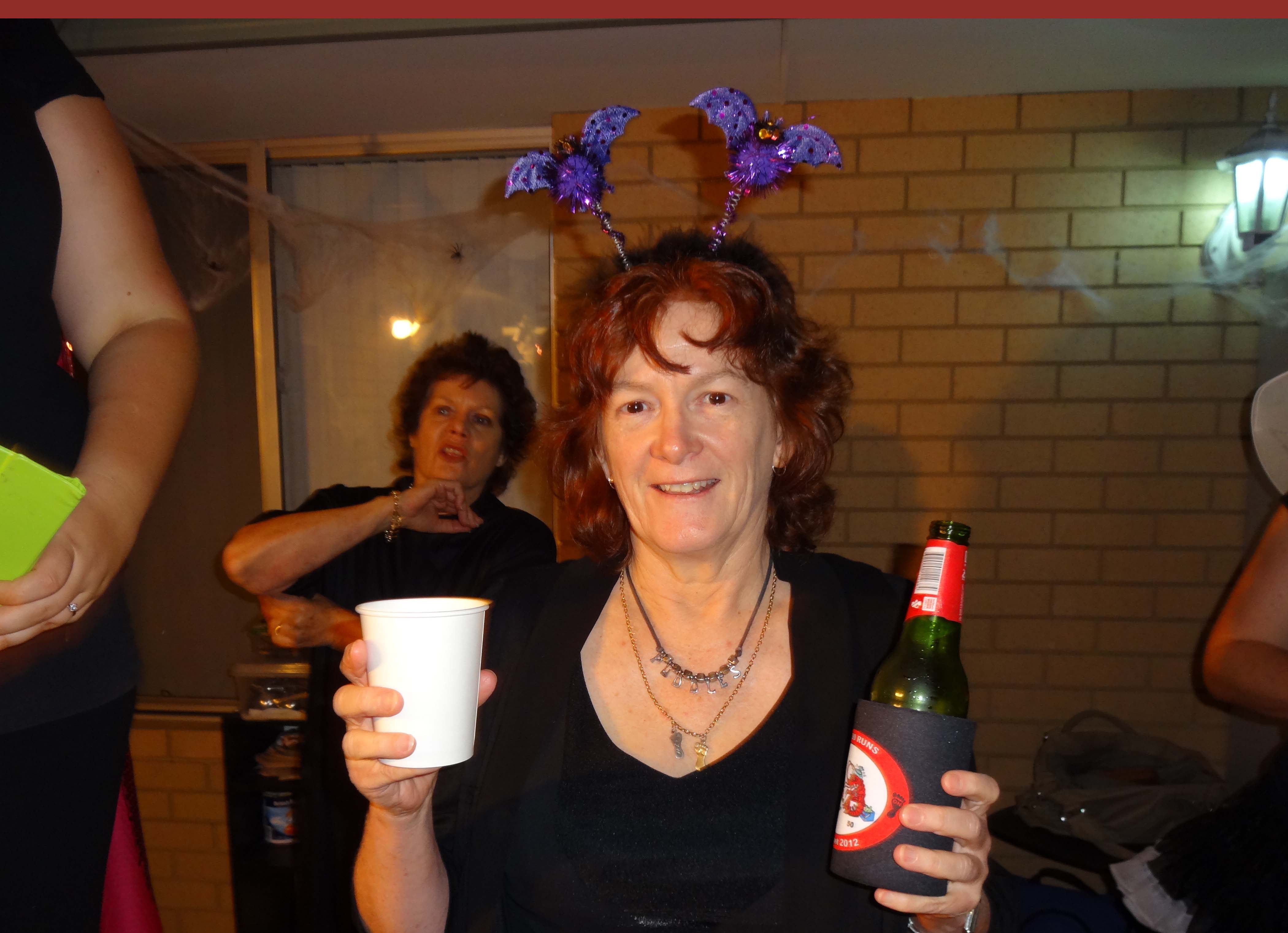 On the eve before Halloween witches, werewolves, pumpkins and black widows joined the cobwebs, spiders and ghosts in Puddles garage.  The Harriettes set of through Hamilton Hill, followed by the howling of a werewolf. It was a good run with the pack kept fairly well together, especially considering one missing trail that took a little while to find! Arriving back at Puddles Haunted House we devoured some delicious “finger food” as Cheapy very kindly offered a chopped off finger that was amongst the little red sausages.

Firstly, a down-down to Puddles for a great run.

Super and Bumbo. It was mentioned to never charge Bumbo again as she enjoyed a leisurely drink rather than a down-down!

There were no Special Runs, no 69ers, and all the “Birthday Bitches” (as labelled by our lovely GM) were all away! Lucky for us that one of our Master Chef harriettes (Commando or Chop Suey or both (a little memory loss here) had made a delicious Chocolate and Beetroot cake for Gossip Girl? (more memory loss) even though she wasn’t there!

Guide Dog was away so she keeps the droopy boobs for another week.

No nominations for a new owner so Banger keeps them for another week! Surely in a bunch of 30-50 woman there would have to be some bitching going on!!

Cookie, Minder and Leopard all charged for claiming various items of lost property. Wenchy is also offering some lost socks. They are not clean for those of you looking for free socks!

Home James charged by Arzy for having difficulties trying to stab a mini sausage with a toothpick, eventually realising she was stabbing the plastic chopped off finger! Home James defended herself with the fact that she didn’t have her glasses on and “When you get to my age…” J

Super charged by Coaster for dressing as a Pumpkin, when there should only be one pumpkin.  Cookie suggested a reverse charge because she recalled the previous week when our beloved Pumpkin had said “Remember next week there is only one Pumpkin!” But she wasn’t at the Halloween run so there was only one pumpkin – “Super Pumpkin”.

Wombat charged as she’s off to America for a month, lucky thing J

Melbourne Cup Run this week, the theme is Milliners’ Delight, so wear your best hat!! I’m sure it will be another fabulous night at Deaconesses!

Sundowner on November 23rd at the Osborne Park Hotel (wohoo love when they’re close to home!)

Salvos Run is on November 27th, the venue yet to be confirmed.  $1 Christmas Hamper raffle will be happening over the next few weeks leading up all donations to a great cause.

The night was finished off by a lovely dinner of roast chicken and delicious salads! A fabulous Halloween Eve night, thanks Puddles!