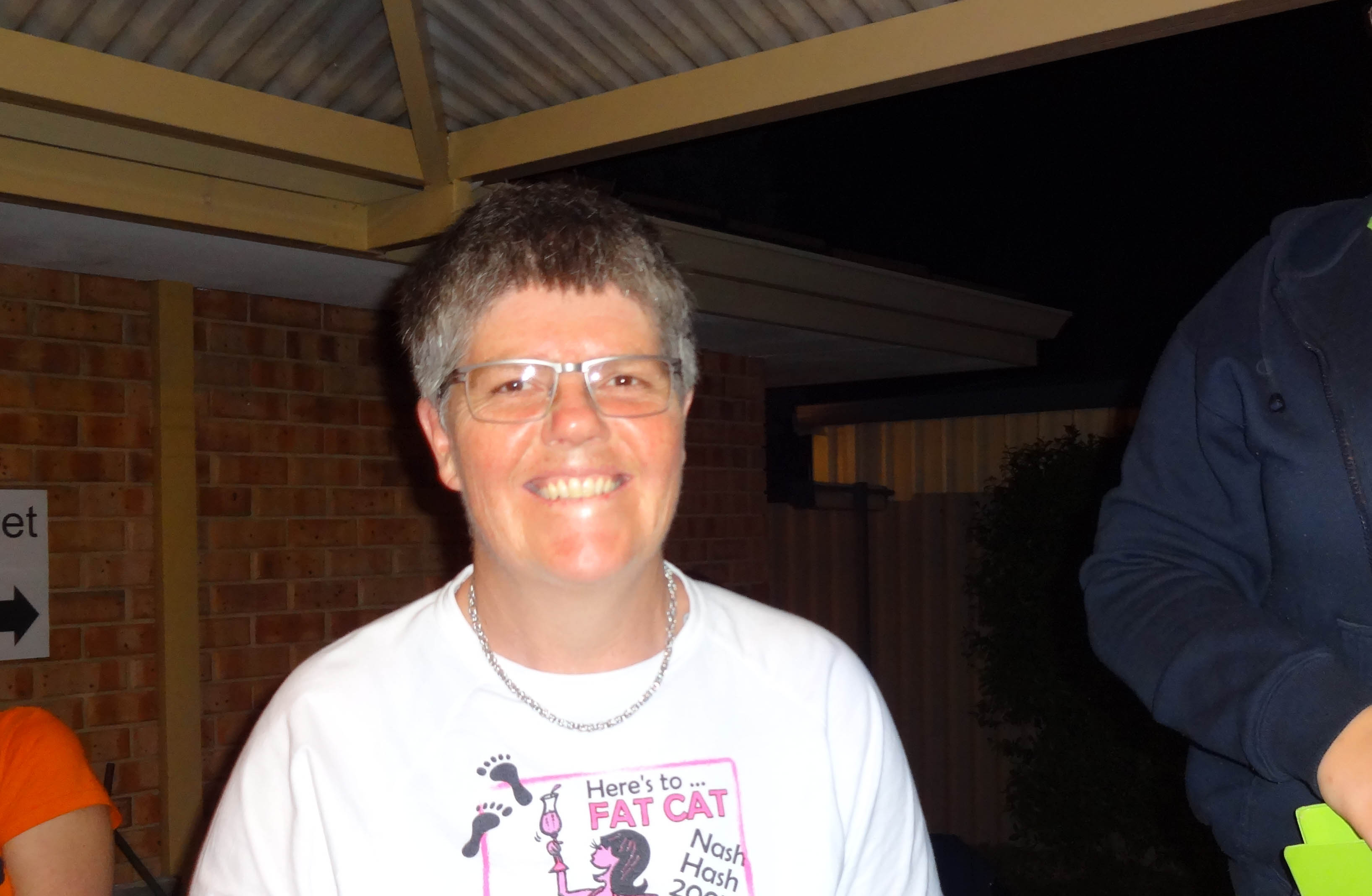 Hare: Shorty
We arrived to be greeted by a “path” of glow lights to head us in the right direction of the backyard. And our run directions included keeping the gate shut so Congo could not escape. I’m sure Congo would return eventually as he knows where he is well off!!!
As expected a very well set run with, which we are led to believe, at least 16 Falsies  Shorty must have counted them. She also promised us NO hills but there was probably 16 of them also!!!
As there are lotsa laneways around that area it makes for a good confusing run so nobody actually quite knows where we are. In fact the front runners turned the wrong way out of a couple of falsies and of course the “sheep” followed,but not for long. Good to see our “running” numbers increasing if only marginally.
More calling and checking in pairs was again bought to our attention.
The circle was started with a D.D to mourn the loss of our wonderful harriette  Mudflaps or  Muddy as she was affectionately known.
Returnees O.T.T., Dynamo, Pumpkin, Nightfill, & Cowpat were all rewarded with a drink
Special Runs Firefly has done 50 well done and No No  received her 100 silver foot 2 weeks late but had to do another D.D. Leopard has done as grand total of 569 and yes had a D.D with the appropriate appendage.  Cookie (that’s me) has been around for 1101 runs but was rewarded with a lovely bottle of Cloudy Bay and 2 lovely glasses, with thanks, tonight, as it was the joint run last week & a lovely cake baked by Shorty.
Birthdays Wombat, this week & Deaconess (overdue)but no less sincere, with  yummy cakes & D.D’s
Bitchy Britches Back seat received them compliments of Gorgeous  with lots of too-ing & fro-ing about “fence sitting” and “gate opening” but I think it was a mistaken figure of speech that had some confusion about the written word. If you understand it better than me you can translate!!!!!!!!!!!!!!
Herk Bear No less than the illustrious G.M Comet who duly received them after her technicolour spew all over her nightie at Dunsborough. As we were in 3 different houses not everyone knew but you can always rely on someone to spill the beans.
Charges  Sarge by  Jewels  a long story about Home James & the green shirts  …….. Back Seat by Camel  so busy talking missed her turn. Jewels then related a tale about Back Seat   serving a group of people who werelawyers only to have Back seat  ask if the lawyers knew that they were baristas (barristers)  LOL …….Cheapy on Mrs Slowcum ?  for complaining about the talking when she is usually the culprit……. Kebab on Chop Suey  for tripping on the run, needs medicine…….. and Tickets for ordering  Mrs Slowcum?  to get her a drink.
G.B.  The Harriettes are now on Facebook but it is a “closed site” so only financial members can access it (IF YOU KNOW HOW)  However it was suggested to ask “The Young Ones” LOL but I think I will consult my 11 y.o Granddaughter, I’m sure she will know more than this techno retard!!!
As we have purchased new Eskies Please DO NOT SIT ON THEM.
Circle over Yummy Chicken & Sweetcorn soup which apparently pleased the new vegies ( good to know as I wasn’t aware for next week)
On On Cookie